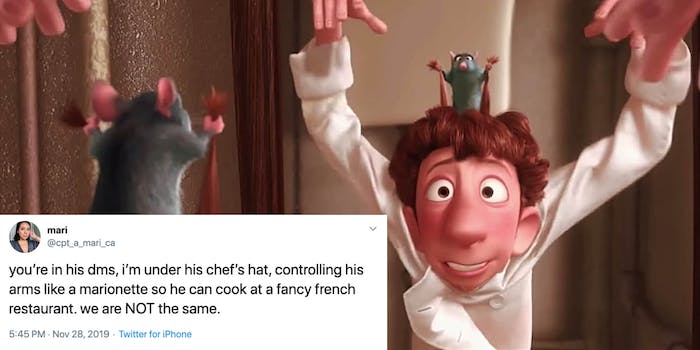 'You're in his DM's, but we emotionally traumatized each other. We are not the same.'

The holidays are upon us, which means cuffing season has officially arrived. Thus, lonely Twitter users around the globe are sliding into DM’s left and right—they’re trying to find that special someone who can cuddle the cold away. However, old flames are stepping forward with the ‘not the same meme’ to shut down all the flirting.

It all started with exes jokingly tweeting about the not-so-healthy behaviors your crush is probably exhibiting without your knowledge. So, before you start thinking you’re special for chatting over Twitter, take a look at the symptoms of REAL emotional ties.

You and their ex are ‘not the same’

You’re in her DMs.. she’s playing my old, stale and expired playlist collection when she’s with you “putting you on to new music”… we are not the same.

you’re in his dm’s, but my phone automatically connects to his wifi as soon as I get near his house. we’re not the same

Of course, for every bona fide ex, there’s always someone who wasn’t quite as successful with romancing your crush. Cue the self-deprecating ‘not the same’ memes.

You’re in her DM’s. I’m her own personal therapist and she only talks to me when she needs emotional support. We are not the same

you’re in his dms i’m in a constant state of suffering and self doubt and wondering where i went wrong. we not the same.

Then, all the pop culture references came rolling in—movies, books, video games, you name it. Even the iconic SparkNotes Twitter account joined in on the fun.

you’re in his dms, i’m under his chef’s hat, controlling his arms like a marionette so he can cook at a fancy french restaurant. we are NOT the same.

you're in his dms. i am locked in a cave trying to defeat a thousand year old legendary monster with him as he sings a personally composed song about us to calm me down. we are not the same

You're in her DMs, I've been turned to stone for daring to look upon her ghastly visage. We're not the same.

hozier be like: you're in her dms, and i am out here making elaborate metaphors about overthrowing authoritarian regimes and fighting against fascists, we are not the same

You’re in her DMs, I have a haunted portrait in my attic that keeps me young and beautiful, we are not the same

Rip to this meme, but we’re different

Simultaneously, Twitter and Tumblr users started comparing themselves to pop culture figures in a similar meme. ‘Rip to ___, but I’m different’ is the perfect way to call out fictional characters for their poor decision making. Stories ranging from Star Trek to Shakespeare to Greek myths were not immune to the good-natured criticism.

if i was fighting the winter soldier i would simply and tenderly tuck his hair behind his ear instead of dislocating his shoulder. rip to steve rogers but im different

Memes do NOT stay the same

Meanwhile, the ‘you’re in their DM’s’ meme started really taking off. As a result, it evolved wildly out of control. Twitter users started making more exaggerated—and unrelated—variations of it.

Oh, you aren’t casting demonic hexes on your crush? We are NOT the same.

Fortunately for everyone, there’s always at least one uplifting iteration of any cynical meme. Here’s a wholesome tweet to ease the pain of knowing you and your crush’s previous partner are not the same.