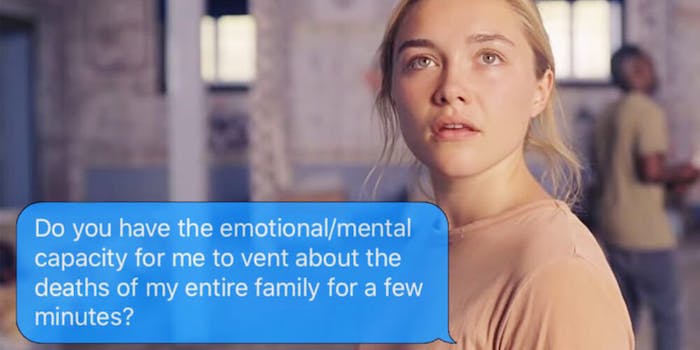 'If I got this text from a friend I would literally never speak to them again...'

In this crazy, mixed-up world we live in, sometimes it’s hard enough to find the bandwidth to deal with our own problems, much less be there for those we care about. But we soldier on and just try to be the best friend or family member we can, because that’s what people do. However, a recent Twitter thread opened up a dialogue on “emotional labor,” and how much of yourself is OK to give. The puzzling outcome has now become a meme.

Melissa A. Fabello, PhD, a self-described Feminist Wellness Educator, tweeted earlier this week that she had received a text from a friend, who—instead of unloading on her without warning—asked if she had the “emotional/mental capacity for [them] to vent about something medical/weight-related for a few minutes.

The person who sent the text is a very good friend of mine. We have the kind of relationship wherein YES OF COURSE I would make time for her and her needs – as I know she would, me.

That is to say, she's the kind of person who doesn't "have to" ask for permission for my time.

In the following series of tweets, Fabello explained that she would always make time for her friend, but why asking for consent for emotional labor was so important.

But here's why that text was really, really important:

(1) It acknowledges that I have limited time & emotional availability.

(2) It asks permission to vent, rather than unloading without warning.

(3) It notes the content of the conversation, which could be triggering for me.

I am the kind of person who people reach out to when they're in pain. Because I'm good at emotional processing AND logical problem-solving, I tend to be a go-to for my friends who need to externally process their experiences.

She continued, noting that she is normally juggling several crises of her own and that though she found her friend’s text “astounding,” it should actually be commonplace.

It sets the tone for the conversation; I'm now prepared for what's coming, rather than feeling barraged.

It gives the listener the ability to do their best job; I can set myself up to have this talk, rather than being put on the spot.

All in all, Fabello does make some fair points (you can read the entire thread here), although she kinda boned the landing by offering her followers a template of what to say to a friend whose emotional labor you just absolutely cannot shoulder.

“Hey! I’m so glad you reached out,” she wrote. “I’m actually at capacity/helping someone else who’s in crisis / dealing with some personal stuff right now, and I don’t think I can hold appropriate space for you. Could we connect [later time or date] instead / Do you have someone else you could reach out to?”

PS: Someone reached out and asked for an example of how you can respond to someone if you don’t have the space to support them.

I offered this template: pic.twitter.com/lCzDl60Igy

Well, a simple “I don’t have time for your shit” would have sufficed, but uh, sure—we guess this is probably fine too?

As the thread began to go viral, others chimed in to point out why a text message like this would actually be the worst thing to say to a friend in crisis.

Someone who ignored me after I got cancer sent me a really fucked up text once I was in remission. It read that they were really sorry that they didn't have the "bandwidth" to the "emotional labor" needed when I was sick and wondered if we could hang out soon!

YUP!!! Exactly this. Sometimes human connection and compassion requires a bit of self sacrifice. That's just how it works. Reasonable selflessness is good

Because the internet movies at nothing if not a brisk clip, it didn’t take long for the “actually, why this is a bad take” stage to progress to the “roasting the take with memes” stage. In one of the earlier examples, someone imagined getting this savage response from “Clippy,” the now-defunct Microsoft Office Assistant. Clippy definitely ain’t got time for you and your emotional labor.

Others imagined other scenarios of being on the receiving end of the emotional labor text, mashing up Midsommar and Joker memes, and so on.

“When I perform the financially uncompensated emotional labor of friendship,” joked another user, alongside a panel from the Watchmen comic.

When I perform the financially uncompensated emotional labor of friendship pic.twitter.com/tH7DFbTdgd