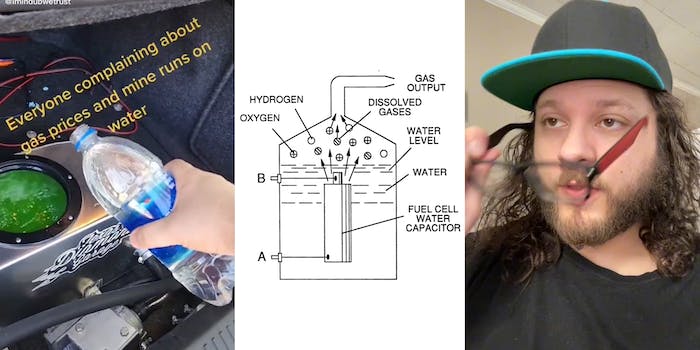 ‘They killed the last guy that did that’: Man claims his car runs on water instead of gas, resurfacing vintage conspiracy theories

The video has viewers pointing to the death of Stanley Meyer.

Some conspiracy theories just refuse to die, and right now a viral TikTok is reviving a true classic: The idea of a secret invention that allows cars to run on water instead of gasoline.

Viewed an astonishing 8.8 million times in the past two weeks, the original TikTok shows TikToker @bilongaz pouring bottled water into a device full of liquid in the trunk of a car. The caption reads, “Everyone complaining about gas prices and mine runs on water.”

As many commenters pointed out, this liquid-filled device is almost certainly just the car’s cooling system. There’s no such thing as a water-powered car, and to be honest, this TikTok seems like it was intended as a casual joke by someone with a car-themed account.

However, many commenters drew connections between this video and long-running conspiracy theories about water-fueled engines. In particular, some joked about the unfounded rumor that the Pentagon assassinated amateur inventor Stanley Meyer for creating a water-powered car. This story is so popular that it was even a punchline on That ’70s Show, based around the idea of gas companies controlling society. (There’s also a long history of people claiming to invent water-based fuel cells as scams or hoaxes.)

One of the TikTok’s most viral responses was a duet posted by @indubwetrust, viewed more than 3.8 million times. “I don’t know if you know this but they killed the last guy that did that,” he says. “They didn’t even try to cover it up; they just killed him.”

The comments sections for both TikToks are full of conspiracy theory references—mostly facetious, but some more serious. “My teachers best friend did this but it was bigger and I don’t know if this the real thing but a few days later he had a black tinted car follow him,” one of the more conspiratorial responses reads.

Meanwhile @bilongaz’s other TikToks are being flooded with jokes about him being “disappeared” by the government. Apparently it’s an ominous sign for him to only post one other TikTok in the past two weeks. “government postin his drafts fly high,” one response reads.

Just to reiterate, there’s no such thing as a water-powered engine, and no reliable evidence of a government coverup. As Politifact and other fact-checking outlets point out, this hypothetical fuel cell (which would split water into hydrogen and oxygen) would defy the laws of physics. It’s completely unclear how it might work, drawing comparisons to other impossible inventions like a perpetual motion machine.

The Daily Dot has reached out to @bilongaz and @indubwetrust via TikTok comment.