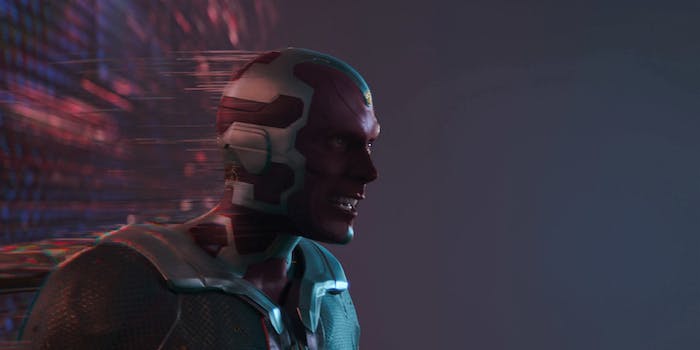 It's a callback to a disturbing moment in Marvel comics canon.

The show already dropped plenty of hints that SWORD wants to control Vision’s super-powerful Vibranium corpse. SWORD director Tyler Hayward repeatedly refers to Vision as an object or a weapon, rather than a person. And when Wanda tried to retrieve his body for burial, she found Hayward’s agents literally dissecting Vision for parts. This provided some clear foreshadowing for episode 8’s mid-credits scene, where Hayward reveals a tank containing Vision’s reconstituted body—which is now eerily pale and emotionless, with none of Vision’s original soul or personality.

While the circumstances are different, this echoes a 1980s West Coast Avengers storyline where Vision (at this point canonically Scarlet Witch’s husband) was killed and taken apart by a rogue government agency. The scientist Hank Pym (aka the original Ant-Man) puts his body back together and retrieves his memories, but Vision isn’t the same as before. He’s cold and emotionless, displaying no understanding of his relationship with Wanda.

Vision’s MCU role is different from the comics; a synthezoid whose body was built by Ultron, and whose mind emerged from Tony Stark’s AI butler Jarvis (also voiced by Paul Bettany). His “soul” comes from the Mind Stone, an Infinity Stone that was subsequently torn from Vision’s body by Thanos, killing him. WandaVision mentions that in his living will, Vision specified that he didn’t want to be brought back to life. He was presumably aware of the danger his body might pose in the wrong hands—and the lengths Wanda might go to if there was any hope of resurrection.

But that request was ignored two times over. SWORD has now successfully brought his body back to “life,” while Wanda somehow found a way to resurrect Vision—or a facsimile of him—in her sitcom universe. Intriguingly, Wanda’s version of Vision does actually seem “real,” meaning that Wanda’s chaos magic can match the power of the Mind Stone. “Sitcom Vision” doesn’t have the original Vision’s memories, but he does have the right personality and emotional connection to Wanda. And he’s self-aware.

“White Vision,” on the other hand, looks very different. We’ve only seen him for a few seconds, but he appears to be the obedient superweapon that SWORD wanted. WandaVision‘s finale is sure to be intense, with Wanda facing two versions of her soulmate—one of whom wants to kill her, while the other potentially wishes he wasn’t alive in the first place.