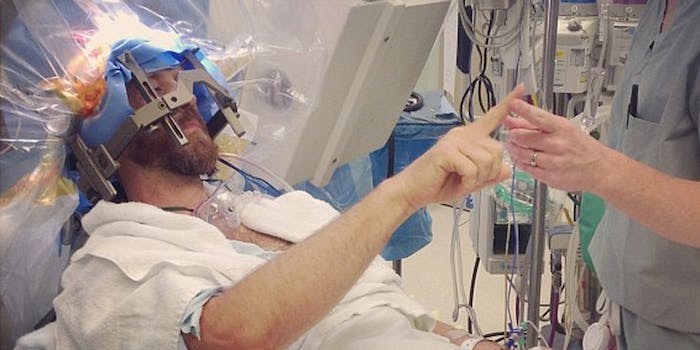 Science is awesome, isn't it?

Science is awesome, isn’t it?

Not only has it allowed humans to be fitted with brain pacemakers, but it’s allowed the rest of us to watch those intricate procedures as they occur, thanks to Twitter, Instagram, and Vine.

The University of California, Los Angeles (UCLA) Health Service used all three to chronicle a man being fitted with a brain pacemaker to counter the effects of Parkinson’s disease. It was the 500th time the procedure was carried out at UCLA, the L.A. Times reported.

We’ve been to the surgery livetweeting and live-Instagramming dance before. In October, one hospital shared tweets and photos from the operating room as a woman had ear implant surgery. Last month, an English hospital Vined a hip surgery.

None really compare to these remarkable clips from UCLA Thursday. The patient was kept awake during surgery and was allowed to sing and play guitar.

He’s not half bad.