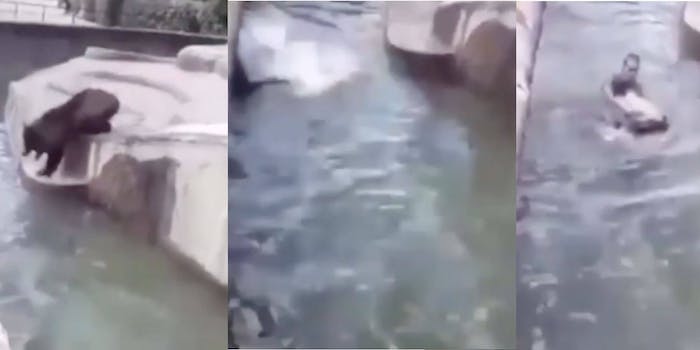 Sabina, the bear, was stressed out.

A Polish man jumped into a zoo enclosure and attempted to drown a bear, and apparently this isn’t the first time this has happened to this bear.

The attack happened at the Warsaw Zoo in Poland as the country reopened after coronavirus lockdowns. The suspect in question is a 23-year-old man, who was allegedly drunk when he broke into the enclosure.

In the video shared widely online, the man is seen jumping into the moat of the bear enclosure after being charged by the beast. As he’s swimming, the bear, whose name is Sabina, inches closer and curiously looks on then jumps in the water. The man begins to flail around and manages to get a grip on the bear’s head.

As her head is underwater, the man attempts to keep it submerged, and the two struggle until the bear gives up and lets him get out of the water.

A spokesman named Karczewska for the zoo told the Daily Mail that while the bear was not physically harmed, Sabina was mentally stressed and let out a nervous growl.

“She used to belong to a circus and is accustomed to the presence of people,” he said. “But she absolutely did not expect a human attack.”

After the attack, she growled nervously until zookeepers arrived to calm her down.

The man was lucky, Karczewska said, while she isn’t “an efficient bear,” she is still in good shape for her age, and the man could have been seriously injured if she was more aggressive.

The Warsaw Zoo does plan to make sure this man faces legal ramifications.

“The animal was exposed to danger and her psychological comfort was disturbed,” the spokesperson said.

Back in 2015, a man jumped into the enclosure and punched the same bear in the head. Sabina tried to protect herself by trying to bite the man. He was later taken to the hospital with minor cuts and bruises.