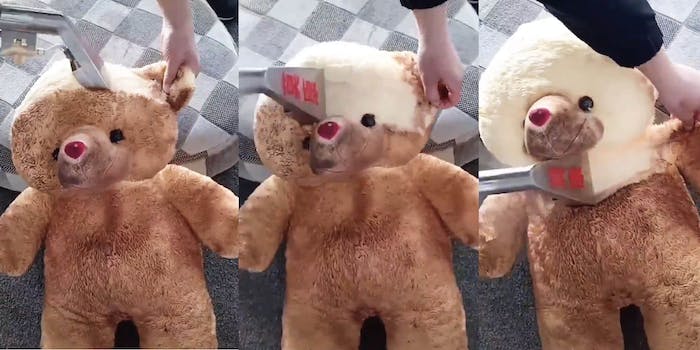 It can be hard to predict exactly what makes a video go viral. However, in the case of an average-looking teddy bear getting steam cleaned, revealing an entirely new color of bear underneath, it seemed all but destined for greatness.

The video—ostensibly part of an advertisement for a steam cleaning device—originated on Douyin (Chinese TikTok), before being tweeted on Feb. 13 by Goldthread executive producer Victoria Ho.

“There is a steam-cleaning company on Douyin and I can’t stop watching its videos,” tweeted Ho.

You, and the rest of us! Ho also dropped a few other tweets of the steam cleaner tackling other tough jobs, such as a chair and a piece of fabric.

“WHERE CAN I WATCH THESE VIDEOS?” tweeted another user. “These are better for my anxiety disorder then medicine omg. My whole soul relaxed.” “This belongs in /r/OddlySatisfying,” added another.

Yet, it was the teddy bear in the first video that truly captured the internet’s attention. And it didn’t take long before people began comparing the poor, inanimate stuffed creature to other things it reminded them of—such as to President Donald Trump’s bizarrely stained orange face and “taking a shower after Warped Tour,” among other things.

“Taking the skin off KFC chicken,” contributed someone else, in an apparent effort to make people never want to eat fried chicken ever again.

And of course, the Kardashians did not get away unscathed in comparisons to the teddy bear video. One user evoked Kim Kardashian’s latest blackface scandal, while another quipped, “the Kardashians getting ready for bed.”

If you think about it, out of all the (oftentimes problematic) products the Kardashians and Kardashian-adjacent choose to promote, not once have any of them entered the personal steam cleaner market. Fewer cosmetics and diet solutions, more teddy bear cleaners, please.