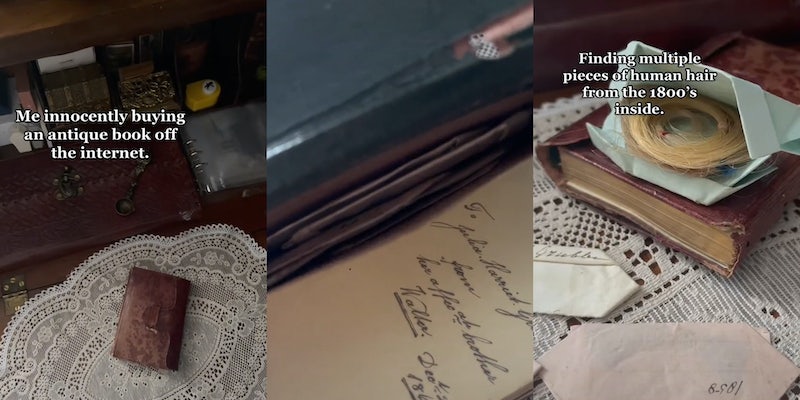 Several TikTokers wondered if the book belonged to a Victorian serial killer.

If you found a collection of human hair inside an antique book, would you be freaked out? Or would you shrug it off as another cool discovery? Your answer likely depends on how familiar you are with Victorian antiques because, in the 19th century, there was a widespread trend for keeping locks of hair as mementos.

TikToker @thedyerghoulhouse specializes in gothic content, going viral this week after sharing an antique book she purchased online. The TikTok in question introduces a small, leatherbound book with a pocket inside the cover—and that pocket contains several envelopes of human hair, marked with dates from the 19th century.

This spooky TikTok caught a lot of people’s attention, racking up 1.9 million views in three days—partly because some people didn’t understand the context for the hair envelopes. Over in the comments section, several TikTokers wondered if the book belonged to a Victorian serial killer.

“Not me screaming CALL THE POLICE and immediately thought about some serial killer,” one of the top comments reads. However, several other viewers chimed in with a more reasonable explanation: The locks of hair are just keepsakes.

While this book would definitely make a good horror movie prop, it’s also a pretty normal 19th-century antique. This morbid trend saw people keep locks of hair from dead relatives, keeping them in albums or woven into jewelry. It’s definitely not crime scene evidence—it’s just a tradition that died out in the 20th century.

Since @thedyerghoulhouse is all about gothic vibes, she decided to frame one of the locks of hair and add it to her home decor. (“Find their descendants and give it to them or sell it to a museum?” one commenter suggested. “Oh no, I’m there keeper now,” she replied.

In another follow-up TikTok, she identified three of the people whose hair she’d found in the book, posting their dates of birth and death alongside their photos.

The photos are from their younger years, but she clarifies in the comments that “Walter died aged 78, Constance 77, and Lawrence 57. If my sources are correct!” So this family history isn’t as sad as it sounds.

While some people were alarmed by the idea of keeping a dead stranger’s hair, this practice is nowhere near as controversial as people collecting human remains like bones. These antique keepsakes are everywhere in the U.S. and U.K., and there’s even an Etsy tag for people who want to buy artifacts made from antique hair.

Updated 6:45am CT, Aug. 2: When reached for comment, @thedyerghoulhouse told the Daily Dot she has a strong interest in Victorian-era mourning traditions.

“I love collecting memoriam ephemera and antique funerary items, I also love Victorian hair pieces, such as jewellery and hair art,” she said.

The TikToker said she framed one of the locks of hair.

“When I came into possession of these locks of hair, I knew I wanted to do something to display them on my ever growing curiosity wall,” she said. “I do intend to make sure these keepsakes are safe and protected.”

The TikToker said that while her intentions are often questioned, as she owns over 200 funeral cards, she just wants to “keep these wonderful pieces of history safe.”

“I’m passionate about remembering those no longer with us by sharing these on my social channels,” she added.