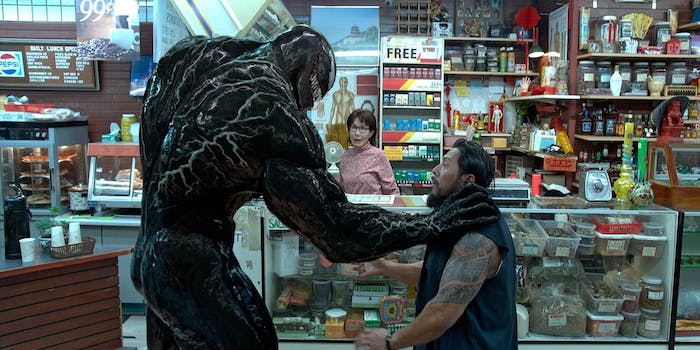 ‘Venom 2’ gets a new title and release date

The film wrapped filming before the pandemic hit.

The second Venom movie was originally due out in October, but like so many films this year, it’s been delayed due to coronavirus. It’s now coming out in June 2021, with Sony revealing an appropriately silly title along with the new release date. Instead of just Venom 2, it’s Venom: Let There Be Carnage, after the Marvel villain.

The new title obviously refers to the supervillain Carnage, aka Cletus Kasady, played by Woody Harrelson. He’s another human with a Venom-like alien symbiote, a creepy serial killer with a love interest played by Naomie Harris. Incidentally, that means that all four of Venom: Let There Be Carnage‘s main characters are played by widely respected Oscar nominees: Tom Hardy, Michelle Williams, Woody Harrelson, and Naomie Harris. It’s a very serious production!

Unlike The Batman starring Robert Pattinson (which was recently delayed from June to October 2021), Venom: Let There Be Carnage actually wrapped filming before the pandemic hit. With director Andy Serkis at the helm, it filmed in England and San Francisco from November 2019 to February 2020.

Until recently, Sony was planning to stick with the original October 2020 release date, so the filmmakers probably don’t need a full year to finish post-production. The eight-month delay is more likely to be based on which release dates were available on the calendar.

Studios are rapidly reshuffling their release schedules, like Disney pushing all of its Marvel releases back by several months. In this case, Venom just took Batman‘s original release date, meaning it won’t clash with any other blockbuster releases that week. In theory, there are still some tentpole movies due out this summer—Christopher Nolan’s Tenet and the Mulan remake in July—but that could change if it looks like audiences are still unable to visit theaters in person.