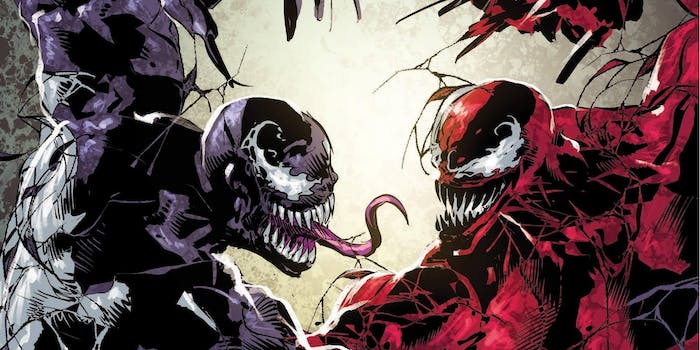 Who is Cletus Kasady, Woody Harrelson’s character in ‘Venom 2’?

Cletus Kasady, aka the supervillain Carnage, has a pretty bizarre origin story.

If you saw the 2018 Venom movie, you may remember that the post-credits sting was a little… puzzling. The scene showed journalist Eddie Brock (Tom Hardy) visiting a prison where he meets a murderer played by Woody Harrelson, with a distinctly Ronald McDonald-looking hairstyle. This guy is Cletus Kasady, and he’ll have a much bigger role in this year’s Venom 2.

After delivering a genre-savvy serial killer spiel, Kasady tells Eddie Brock that he’s going to escape from prison, at which point “there’s gonna be carnage.” Carnage is, of course, his supervillain name in Marvel Comics. So, who is Cletus “Carnage” Kasady, and what does he have to do with Venom?

Who is Cletus Kasady in Marvel comics?

Cletus Kasady is one of the main villains of the Venom comics, and like Eddie Brock, he’s the human host of an alien symbiote. His symbiote is called Carnage, because all the Klyntar aliens sound like they were named after an edgy skateboard brand.

Kasady and Carnage were created in the early 1990s by artist Erik Larson and writer David Michelinie, who also co-created the Scott Lang version of Ant-Man (ie. Paul Rudd), War Machine, and Venom himself.

The key conceit of the Klyntar symbiotes is that while they’re all bloodthirsty killers, they have different personalities and they’re influenced by their human hosts. Over the course of Marvel canon, Eddie Brock has generally been portrayed as Venom’s soulmate, offering a positive influence on Venom’s violent nature. By comparison, it was basically a horror story when Peter Parker became Venom’s host, because there was absolutely no overlap between a sweet-natured young superhero and a monstrous alien who liked to bite off people’s heads. Like Venom, Carnage has inhabited several human bodies, but Cletus Kasady is his most famous host, a human who was already a serial killer before the symbiote came along.

Kasady was introduced in The Amazing Spider-Man #344 as Eddie Brock’s cellmate in Ryker’s Island supervillain prison—not to be confused with the real-life Riker’s Island. You can clearly see where Erik Larson’s character design was influenced by the Joker:

When Venom arrived to break Eddie out of prison, he left his newborn offspring (or like… some Venom goop) behind in the jail cell, where it bonded with Kasady. The Carnage/Kasady partnership left a trail of gory destruction in its wake, becoming a recurring supervillain in Marvel comics. His powers are basically the same as Venom’s: shapeshifting, super-strength, healing, and various abilities borrowed from Spider-Man. But he’s also a more formidable opponent because he’s both stronger than Venom, and revels in pain and chaos. While Eddie Brock introduced Venom to a vague sense of morality and justice, Kasady just made his symbiote into even more of a monster.

Venom 2 comes out in October 2020, and as Venom‘s post-credits sting suggested, Carnage will be the villain. Judging by the fact that he’s still in jail, Cletus Kasady probably hadn’t met the Carnage symbiote during that scene with Eddie Brock. However, this jail visit may set up a similar scenario to the comics, where Venom accidentally gives birth and/or leaves his genetic material behind in Kasady’s jail cell, prompting him to bond with the Carnage symbiote.

Tom Hardy posted (and then deleted) a photo of Harrelson’s Venom 2 costume on February 17, showing Kasady with shorter hair and wearing a Hawaiian shirt. So, it looks like the film will shift away from his admittedly ridiculous-looking wig in that prison scene. We don’t know much else about his role yet, but we can expect a trailer to show up in the next couple of months. Venom 2 will also feature James Bond franchise star Naomie Harris as Shriek, a Spider-Man villain who is often paired with Carnage in the comics.