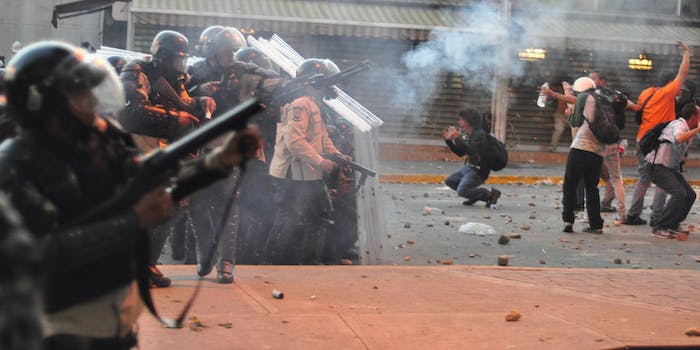 Venezuela may have shut down messaging app to silence protesters

Since the Arab Spring began in 2011, there has been no shortage of pixel space devoted to lauding the powerful role of social media and mobile technology in orchestrating political uprisings against authoritarian regimes. But when the government controls the Internet, planning an insurrection online has plenty of challenges.

That’s what protesters in the Venezuelan capital of Caracas are coming to realize. Anti-government demonstrators there have come to heavily rely on a mobile walkie-talkie app called Zello to coordinate protest efforts among themselves without tipping off the government. But at the end of last week, protesters began to report that the app had stopped working. A cloud of suspicion quickly fell over the government. Was it deliberately arranging the outages through a state-run Internet service provider (ISP)?

Zello works by allowing phones to communicate through traditional radio-type channels, allowing for distribution of person-to-person messages without the cost of phone calls or SMS messaging. It’s been popularly embraced by protestors in both Caracas and in the Ukrainian capital of Kiev because it allows them to communicate without posting public messages visible to the government.

Although Zello’s communications model is based off radio, it still requires an internet or cellular connection to transmit messages. And that’s the rub in this particular case. Alexey Gavrilov, Zello’s chief technology officer, said the app was blocked for users of CANTV, Venezuela’s state-run ISP. This coincidence has given the leaders of Zello, based out of Texas, cause to suspect the government played a role in the disruptions. The Venezuelan government has not responded to the allegations.

Gavrilov is responding to the block by rewriting Zello’s code to get around it.

“We just released an update to the Android application which changes the IP addresses and makes it much harder to block them, and we also submitted updates for iOS and BlackBerry,” Gavrilov told CNN. “So people with Android can already use Zello again in Venezuela.”

For nearly a month, protesters in Venezuela have been holding continuous, broad demonstrations against the administration of Nicolás Maduro, who succeeded the presidency after the death of long-time leader Hugo Chávez last year. According to the BBC, the protest began among college students in the outer states of Tachira and Merida who were demonstrating for better public safety in a country that has the fifth highest murder rate in the world. Several of the student protestors were arrested, and a retaliatory march on the capitol was soon planned.

On Feb. 12, the three demonstrators were killed as protesters descended upon Caracas. There have been protests everyday since, and the demonstrators have widely expanded their list of grievances, which now include Venezuela’s 56.2 percent yearly inflation rate and chronic shortages of basic necessities.

Zello is not the only social media platform being censored by the government. Venezuelans have also reported that pictures and videos have been blocked on Twitter. A Twitter spokesman said the company also believes its services are being blocked by the South American government.

In the 2010s, social media has become a vital tool for virtually all mass protest demonstrations, from Occupy Wall Street to the Arab Spring to the current conflict in Kiev. In the Ukraine, protesters were able to bring significant global attention to their cause by live streaming deadly riots in the capital city. Others used networks like LiveJournal and Instagram to share powerful protest images.

But in countries like Venezuela and Syria, governments have attempted to curtail the liberty that social media affords protesters by exercising authoritarian control over the infrastructure these demonstrators and insurgents use to communicate.

Some app developers have attempted to get around this issue by finding a way for mobile devices to communicate with one another without relying on a network. The makers of Tin-Can, a mass messaging app that uses the built in Wi-Fi transmission capabilities of all mobile devices to deliver messages directly to other phones within close proximity, believe their program can become a vital tool for protesters. Creator Mark Katakowski told the Daily Dot last year that it has the potential to help protesters within a specific geographic location relay crucial messages without relying on government controlled networks.