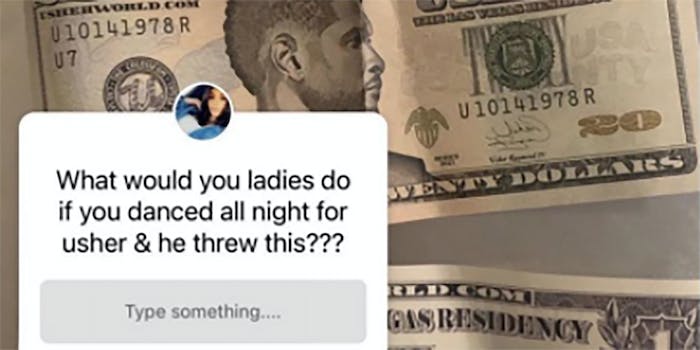 'Usher got a whole song for strippers & encouraging them to make money.'

Famed entertainer Usher is being accused of using fake bills with his name and likeness printed on them in exchange for exotic dancers, via an Instagram account that showcased some of the bills on the platform Monday.

The IG post, from @thedancersresource, alleges that the photo of a fake $100, $20, and $1, were “gifted” from Usher to at least one dancer. “Danced all night for Usher and this is what he tipped her with?” the account asks. (The bills include embellishments that clearly show the counterfeit money to celebrate Usher, including pictures of the performers and the URL for his usherworld.com site.)

That narrative comes from text overlaid on the photo, noting “My GF posted this,” asserting that this was a “level of fuckery” not previously seen by the poster, and that this was rationale for staying away from celebrities.

The Dancers Resource, per the Apple Store description linked to the IG account via Linktree, is “an app designed to assist dancers with the necessary information on clubs that they would otherwise have to find out personally by trial and error,” including the lowdown on “auditions, wages, manager info, club vibe, [and] experiences.”

The post was also shared on Twitter, where the person behind the @LaCienegaBlvdss assessed, “Usher is getting exposed by stripper pages for throwing counterfeit bills in the club. The stimmys have dried up and the stunt queens are back to their old stunts.”

The report was the source of much mirth on Twitter, particularly for people finding material straight from the Usher songbanks.

Ronald Isley pointed out, “Usher got a whole song (‘I Don’t Mind’) for strippers & encouraging them to make money.” He then snarked, “I guess he didn’t mean his money,” using the Raven-Symoné laughing meme for good measure.

Another Twitter user pulled an apropos part of the “Confessions, Pt. II” video, along with the explainer, “Strippers getting a call from the bank telling them not a single bill from Usher was real.”

Another Twitter user saw a tweet asking, “Usher throwing fake money at a strip club? To hard working women?” and answered with this video of a woman hammering a punching bag repeatedly. It’s captioned, “All the lady performers when they see Usher on the streets.”

Another observer, @hotlikehelena, asserted, “If i was a stripper, this Usher thing would be my villain origin story because HUH.”

Usher, slated to open a residency at Caesers Palace in Las Vegas this coming July, hasn’t responded on social media as of Monday afternoon. His most recent Instagram post on Sunday, however, shows him wearing a bucket hat made from dollar bills. (Real ones.)

The Daily Dot has reached out to an Usher representative for comment.