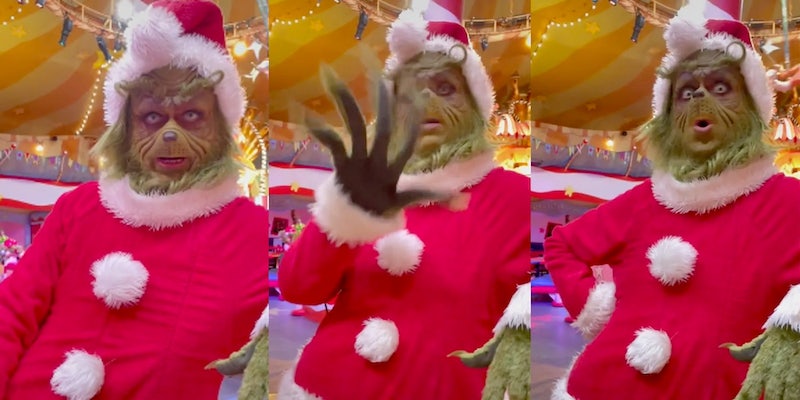 ‘Why am I attracted to him!’: TikTokers thirst over hilarious theme park Grinch

'Whatever they're paying him, it's not enough.'

People are thirsting over a very in-character Grinch and we lowkey get the appeal.

On a recent trip to Universal Studios, theme park YouTuber and blogger Alessa Dufresne ran into the iconic Christmas antihero. Little did she know that she’d be in for a surprisingly delightful chat with the furry green cynic.

Dufrense starts out by complimenting the Grinch—who’s giving her a hefty side-eye—in the viral TikTok. She tells him his outfit is “chic.” “What?” he replies, scrunching his nose.

“I thought you said cheap!” he yelled before switching to a calm tone. “Which would be correct because I did make it myself. It’s a DIY.”

Dufresne asked if he made it out of materials found in the trash and the Grinch explains that he made the festive red and white number, which is really just a long sleeve shirt and hat with no pants, out of repurposed curtains.

The next part is what people in the comment section found most endearing.

The blogger points out that she and the Grinch have the “same lashes on.” The person, still maintaining character, seems earnestly curious to confirm whether they are lash extension twinsies.

“Do we? Come here,” the Grinch leans into her face giving the camera an eyeful of thick green chest hair. The Grinch is quick to deny the comparison.

“Yours are fake,” he concludes. “But you’re doing great work with the contour. Yeah, I can tell.”

As she walks away after thanking him for the compliment, Dufresne wishes the furball a happy holiday. In classic Grinch style he waves her off with his strangely long fingers and replies, “Yeah, yeah, whatever.”

The TikTok has a whopping 15 million views on the video-sharing app. The cover image reads “Grinch complimented my contour.”

The video caption reads “The Grinch was crabby, but liked my makeup.”

People in the comments section were loving the interaction between the YouTuber and the villain turned hero.

Some were pining for the person beneath the prosthetic:

“HELP WHY IS HE HOT,” one commenter wrote with gusto.

“I just know he is FINE under that makeup,” another assessed.

“To everyone wondering why they are attracted to him: it’s the genuine confidence,” a commenter wrote.

Others were here for his well-timed comedy.

“Him saying he can tell your contour is SHADE sister,” one person wrote.

“Whatever they’re paying him, it’s not enough,” another said.

“The ‘do we’ was perfect,” a commenter replied.

The Daily Dot reached out to Dufresne via Instagram DM.