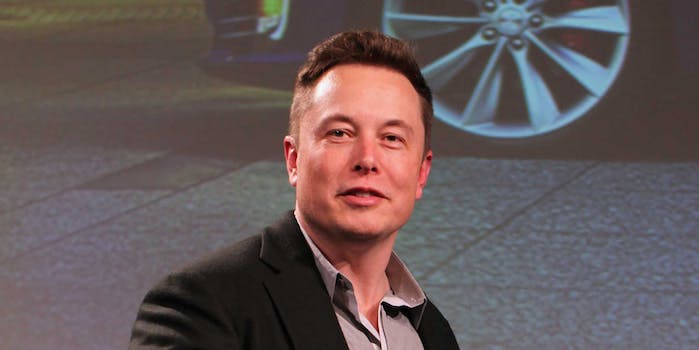 A battle is brewing.

There are likely few public personas in Silicon Valley more different than those of Uber CEO Travis Kalanick and Elon Musk, the CEO of Tesla and SpaceX.

Kalanick has portrayed himself and his company as a rough-and-tumble symbol of capitalism, ruthless in its tactics toward competitors—and even its own drivers. Musk, depending on who you ask, is either Leonardo Da Vinci reincarnate or the man who can lead humanity into space and shuffle off our earthly coil. Kalanick denies up and down that Uber even employs its drivers, sticking to the coy language of Uber as a “ridesharing” app. Musk wants to build a “gigafactory” in the Nevada desert and is opening up Tesla dealerships in 50 states. The divide between the two is the gap between tech’s most brutal tacticians and idealistic dreamers.

While Musk wants to get you to Mars and Kalanick just wants to get you across town, there’s a war brewing between these two giants. Both are solidly in the people-moving business, competing against the entrenched forces of mass public transit and automobile makers. Both Uber and Musk aim to either eliminate or supplement these industries, replacing subways and gas guzzlers with on-call cars or stylish electric vehicles.

This war for how you get from Point A to Point B currently has both parties focused on larger targets, but their collision is quickly appearing to be less a question of possibility and more of eventuality.

If the metric is “total people and things moved,” Uber is way out in front in this race. The company has more than 8 million active customers who take over 1 million rides a day through the app. In the five short years since the company’s launch, Uber has expanded to 290 cities in 57 countries and counting.

Unlike Musk, Travis Kalanick hasn’t really had to build any actual thing to spread his company throughout the world. Even though Uber often feels like a multinational force of nature, its really just a simple app that tells passengers and drivers how to find one another. Although there are an estimated 300,000 Uber drivers around the world, Uber itself employs only 2,000 people.

Uber has amassed a gargantuan amount of wealth very quickly and does so with relatively little effort and team management that a company of its worth would otherwise handle. With its recent $50 billion valuation, Uber is worth roughly $25 million per employee—or $166,667 per driver.

The divide between the two is the gap between tech’s most brutal tacticians and idealistic dreamers.

As is true in most companies, this wealth distribution is vastly uneven. But unlike most other companies, Uber has outright refused to recognize its drivers as active employees, even though drivers are their largest source of their influence and power. A class action lawsuit from a collective of Uber drivers claims they are full-time employees of Uber and are likewise entitled to benefits. On Monday, the California Labor Commission’s Office ruled with the drivers, promising a huge shift in the way the company does business.

However, Travis Kalanick knows he owes Uber drivers, and it’s likely the reason his company is pursuing the dream of the self-driving car with more vigor than anyone other than possibly Google. It was only a year ago that Kalanick first angered drivers by flippantly suggesting their replacement by self-driving cars is inevitable. Since then, Uber has opened up its own robotics lab in Pittsburgh, and an early prototype has even been seen on the road. Last month, Uber poached 40 top researchers from the robotics lab of Carnegie Mellon—one of the top robotics labs in academia.

All of this is in the name of replacing not just taxis and buses but even the need for private individuals to own a car at all. “More innovations that make Uber cheaper than owning a car is what the next five years is all about,” Kalanick told a group of staff at Uber’s recent fifth birthday party. One popular estimate has found that, if you live in a major city and drive less than 10,000 miles a day, Uber is already cheaper than owning and maintaining a car.

The economic costs of large populations making that transition would be enormous—an estimate from PricewaterhouseCoopers thinks a change from individual car ownership to self-driven shared cars would reduce sales by 99 percent, and prolific automotive startup founder Zack Kanter even goes so far as to suggest GM, Ford, and Toyota “will be bankrupt by 2030.”

It’s a future that should certainly worry Tesla’s Elon Musk. Tesla is fighting hard for acceptance in the automotive industry—and has largely been succeeding. Unlike Uber, Tesla must implement a real infrastructure of factories and charging stations to function and has done so while remaining profitable and ethically clean. Its complex network of charging stations hopes to be reachable by 98 percent of the U.S., and its Model S can now easily make a trip across the continental U.S. at a total cost of $0 to the driver.

And if the Model S’s $70,000 price tag is a bit too pricey for most buyers, Musk unveiled this week the Model 3, a sedan or crossover utility vehicle available for $35,000.

Although switching from gas to electric might not be a huge deal in the scheme of how people move around—you’re still driving yourself in a four-wheeled vehicle—it’s a direct disruption of the automotive industry and merely one facet of how Musk really wants to change public transit.

More than two years ago, Musk raised eyebrows when he unveiled his concept for the “Hyperloop,” a system of “electromagnetic transportation” that could carry passengers along a system of tubes at speeds totaling 600 miles per hour for distances over 900 miles. It could (theoretically) make the slog from Chicago to New York City in less than 90 minutes and Los Angeles to San Francisco in under an hour.

While it initially sounded like something out of Isaac Asimov’s imagination, it seems as if the Hyperloop is moving closer to becoming a reality. This week, SpaceX, Musk’s space exploration company, announced they would be building a one mile Hyperloop track for prospective designers and engineers to test their designs for the “pods” that will carry passengers.

It’s a major step forward for one of the most futuristic technologies to come out of Silicon Valley. Even more than the taxis and subways Uber is threatening to put out of business, the Hyperloop is Musk’s ultimatum to airlines, railways, and possibly even the shipping and trucking industries.

While he often talks in Valley platitudes about changing the world, Musk’s goals are often more ambitious than Uber’s, even if both are after the same target. Whereas Uber would like to remove vehicle owners from the problem of transportation altogether, Tesla is hoping to be a leader in creating a new kind of car, making the long-heralded dream of the all-electric vehicle a possibility for even consumers on a modest budget.

While it’s easy to imagine a future where Tesla and Uber work together—Uber rides, brought to you by a self-driving Tesla—it’s more likely these companies are two jackals staring at the same corpse. Both are innovative brands challenging not just the business model of transportation but also the meaning and value of it.

As distant as they may seem from one another, the future both Musk and Kalanick envision presents a war for your money that could change the world, for better or worse.