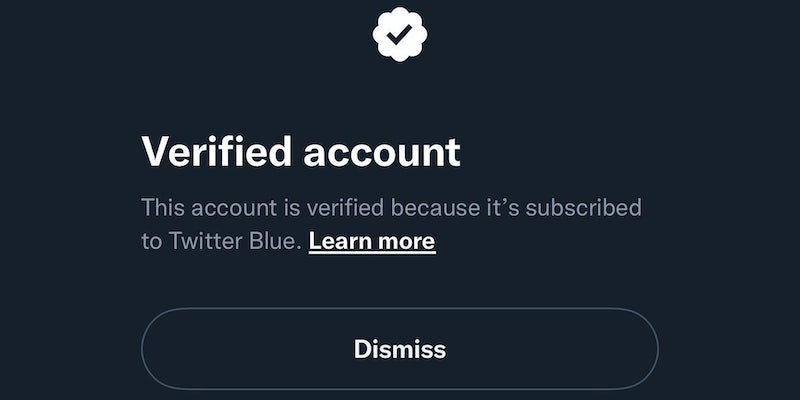 To the surprise of almost no one, Twitter’s new verification rollout has resulted in a barrage of hard-to-spot parodies, shitposting, scams and phishing attempts, and celebration from right-wing accounts with newly minted checkmarks. But after Elon Musk killed off one attempt to differentiate between accounts that purchased a checkmark and accounts that already had one (which served to verify identities and accounts of public interest), the latest solution to mark the difference is lending itself to a new meme format.

While there is a Google Chrome extension that makes it easier to differentiate between types of verified Twitter accounts, those without the extension have to literally click on the checkmark displayed on a profile to tell whether Twitter verified that account’s identity or that account subscribed to Twitter Blue for $7.99 a month (also referred to as $8) to get a checkmark.

If you’re scrolling through your feed, you have to pay closer attention to whether an account is who they say they are.

With those labels, Musk’s attempt to democratize the verified checkmark only divided it even more, leading those who were now verified because of Twitter Blue (for reasons other than to troll the hell out of Twitter) to become the subject of mockery. But the two types of Twitter verification also allowed for a four-panel meme format to emerge.

The gist is simple. The accurate or “good” entity—or even something that is at base level—is comparable to a verified account that was marked so “because it’s notable in government, news, entertainment, or another designated category.” The inaccurate entry, or anything that’s seen as a step-down, is comparable to a verified account marked so “because it’s subscribed to Twitter Blue.”

Among Us community director Victoria Tran found a way to explain the difference more succinctly by using in-game mechanics as a comparison: The Twitter Blue checkmarks are the imposters.

An easy way to visualize it is with pop culture. In one post, the Avengers are compared to the “Revengers,” knockoff toys created as part of a prank. (The Avongers from She-Hulk would work here, too.)

Or, when it comes to TV antiheroes, Ozark, in its early seasons, was compared to Breaking Bad and seen as a knockoff of the beloved drama.

And look no further than Mac and Me, a ripoff of E.T. that more or less doubled as a feature-length McDonald’s commercial.

People can put as much or as little merit into the value of a checkmark. But as long as people are willing to pay for it, there will always be others more than ready to mock them for it.