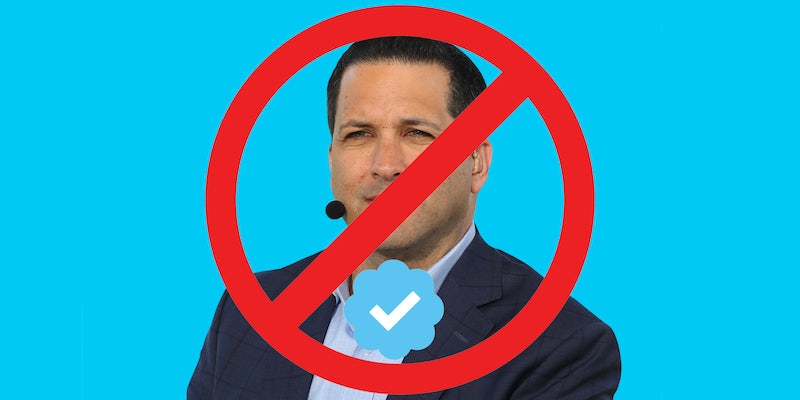 It didn't take long to show the whole thing was a farce.

At 2:29pm, Adam Schefter of ESPN reported news that would shake up the NFL: Josh McDaniels, head coach of the Oakland Raiders, was fired.

The tweet racked up more than 3,000 likes and thousands of retweets, as all Adam Schefter tweets do. After all, he’s the primary source of breaking news around the NFL and he is verified on Twitter so people can tell at a quick glance they are looking at real news from a trusted source.

Except, it wasn’t Schefter who tweeted that—despite the account’s display name reading “Adam Schefter” and a blue checkmark appearing next to it. It was @AdamSchefterN0T, an account created earlier that day by a 19-year-old college kid who had $8 to spare.

The phony Schefter page was set up to be identical to the real one; it had the exact same avatar and display name. It also had a blue checkmark, previously only given to accounts to indicate the person operating it was who they claimed to be. It was only on the account page that users saw a pinned tweet stating, “I am not Adam Schefter this is a parody account.”

The operator of that account—which was suspended after a half-dozen or so tweets, most of which went viral—told the Daily Dot that he’s a computer science major who loves football, and typically uses Twitter to keep in touch with friends and talk about the sport they love.

But Elon Musk’s new policy for verification allows anyone subscribed to Twitter Blue to get a blue checkmark next to their name. The fee is only $8 a month. Just like that, this college kid went from talking about football to driving the conversation for an afternoon.

The @AdamSchefterN0T account claimed Bears quarterback Justin Fields was suspended for sharing a documentary that contained antisemitic views—a reference to a real controversy in another sport where Brooklyn Nets star Kyrie Irving got suspended for posting antisemitic content on Twitter and Instagram. They also claimed the Cowboys were signing wide receiver Odell Beckham, Jr.

Each tweet would be a massive story if true. But because the so-called parody account had a blue checkmark, the tweets started to spread.

“It was 100% the blue checkmark,” the account operator said.

It also may have been boosted by the apparent fact that Twitter plans to prioritize paid accounts in search results.

While it’s not uncommon for these types of parody accounts to crop up on Twitter, it was previously harder for them to gain traction. The ability to basically buy credibility with Twitter Blue makes it possible for these accounts to get much more attention.

The account @AdamSchefterN0T did eventually get shut down, but it stayed active for much longer than other accounts in the same vein, including one that claimed to be LeBron James and demanded a trade from the Los Angeles Lakers.

The operator of @AdamSchefterN0T said that they believed his account followed all of the rules laid out by Elon Musk and Twitter’s Trust and Safety team.

“My bio and pinned tweet clearly state to not take my tweet as fact, simply clicking on my profile will let the user be aware that this account is parody,” they said. “As long as I am following those rules which Elon laid out, I do not think I will be suspended,” they said in an interview with the Daily Dot before they were suspended.

The rules that @AdamSchefterN0T was referring to were those laid out by Elon Musk prior to the official rollout of the Twitter Blue checkmark. He had to establish those after a number of users, including those who were already verified on Twitter, changed their display names and profile pictures to appear as Elon Musk to mock him earlier this week.

According to Twitter’s Help Center, users “may not impersonate individuals, groups, or organizations to mislead, confuse, or deceive others, nor use a fake identity in a manner that disrupts the experience of others on Twitter.”

The company doesn’t appear to have any specific rules for parody or impersonation for Twitter Blue subscribers. What @AdamSchefterN0T did could be considered blurring those lines, even if they’re claiming parody.

“I would claim Twitter is not applying the rules that it claims,” they said.

Perhaps most interesting about the user’s brief foray into roleplaying as a verified news breaker was the fact that they did not seem interested in trying to bend or break the rules of Musk’s new regime.

“I think Musk buying Twitter was a shift in people being more outspoken on the platform without fear of cancellation,” they said. They also questioned why verification was “even a thing in the first place.”

The person behind @AdamSchefterN0T also said that paid verification shouldn’t hurt trust on the platform. While they acknowledged that it could be abused, they thought “the risk is low” of that happening.

Unfortunately for @AdamSchefterN0T, they appear to be wrong. His post, and others, kicked off a news cycle about just that, with numerous users criticizing Musk’s rollout of Twitter Blue and the accounts that popped up in its wake.