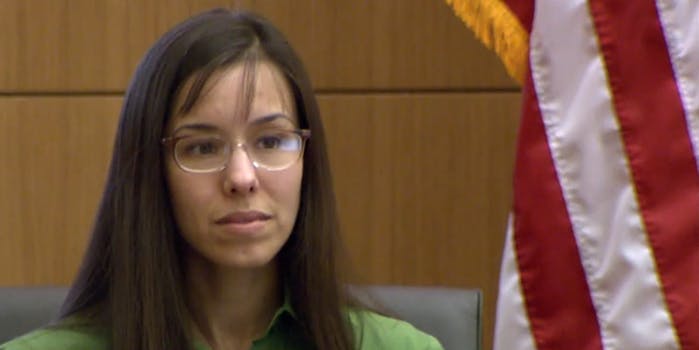 Attorneys want to make sure jurors aren't influenced by outside information.

Lawyers for Jodi Arias have demanded access to jurors’ Twitter accounts to ensure they are not tweeting about the trial while the convicted murderer awaits sentencing.

Arias was found guilty in May of murdering her boyfriend in 2008 in Phoenix. However, the jury failed to decide her sentence. Prosecutors are debating whether to bring in a new jury for a second penalty phase as they seek the death penalty.

In a motion filed Wednesday, Arias’s lawyers demanded the court require all jurors in the second phase to disclose their Twitter handles. The attorneys, who might not know the usernames otherwise, want to make sure Arias has a fair trial. A hearing is set for Monday, the Associated Press reported.

Jurors are not allowed to view media coverage or discuss the case until they are dismissed to avoid influencing their decisions. However, there’s every chance they could see a tweet from someone else that includes pertinent information not revealed in court.

The lawyers said an alternate juror tweeted with a journalist after the first trial phase, claiming she was still allowed to use Twitter but couldn’t talk about the trial. The same woman was in a Facebook conversation in which someone else spoke about Arias’s temper.

Arias’s trial, which began in January, spurred a flurry of online activity as supporters and opponents dissected evidence and chatted with reporters covering proceedings. Some who were angry with a domestic-violence expert witness left scathing reviews of her book on Amazon. Arias herself was said to have been tweeting from behind bars through a proxy.