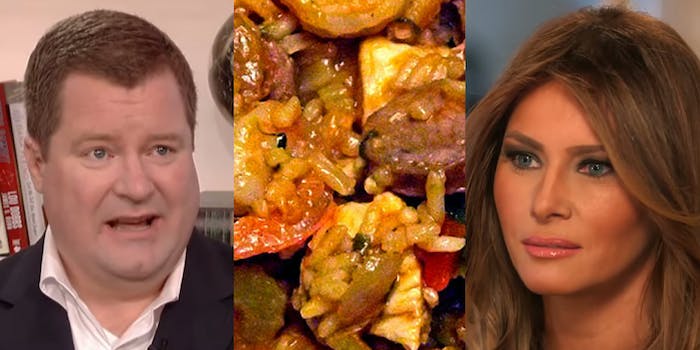 After the Hill reported Monday that the first lady had put finishing touches on the White House’s menu ahead of a visit from French President Emmanuel Macron and his wife, Erickson dismissed the offerings as “unpronounceable.”

“This menu is why I could never be President,” he tweeted. “I’d serve fried chicken and mashed potatoes with sweet potato pie for dessert.”

The menu items that appeared to so offend Erickson? “Rack of spring lamb with Carolina gold rice jambalaya.”

People on Twitter were confused by Erickson’s comment. Was it the lamb or jambalaya that stumped him?

Even weirder: Erickson is a Jackson, Louisiana, native, so surely he’s heard of the Cajun meat and rice dish.

What Southerner in good standing would call jambalaya "unpronounceable froo-froo garbage?" There is nothing remotely pretentious about it. https://t.co/iR9t9K0CdR

Jambalaya. I at least expected something nominally foreign to American palates like creme brûlée or bouillabaisse but no…he's intimidated by jamba-friggin-laya. Do you want to Supersize that mayonnaise slushy Erick? https://t.co/iSavlTOZkx

Jambalaya is an un-American dish enjoyed only by out-of-touch coastal elites, like Dijon mustard and coffee https://t.co/kXCWa0qpEH

Pretending not to know what jambalaya is to own the libs: https://t.co/VmyQSwftGM

And maybe he just wanted to prove a point.

Eating shittier food than you have to to own the libs. https://t.co/o5UEoQ8PR1

Either way, people helpfully pointed out that being unable or unwilling to eat jambalaya probably isn’t the only thing disqualifying Erickson from a presidential run.

Sure. The only thing holding you back is what appears to be a totally normal menu. https://t.co/0ngUlHTKxc

Well, this wasn't the reason I would have chosen, but as long as we're clear on the fact that you could never be President. https://t.co/7JcwxDiA6e

The menu is "rack of spring lamb with Carolina gold rice jambalaya." You're right Erick if you can't pronounce those words you would have a lot of trouble holding elected office in an English-speaking country https://t.co/I7U0hjflYc