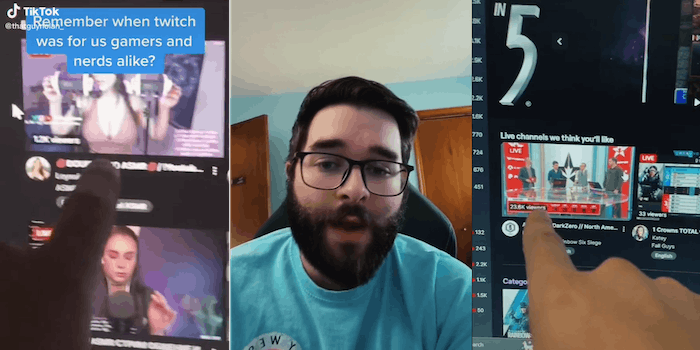 ‘You can’t complain about it when evidently you’re watching them quite a bit’: TikToker calls out Twitch’s homepage for only showing ‘tits,’ exposes himself since videos are recommended based on user behavior

'Those are literally the channels that Twitch thinks you'll like.'

A TikToker calls out a Twitch streamer for a now-deleted video in which he claims that his homepage is just “tits,” explaining that the homepage algorithm is based on user behavior.

In a now-deleted video by TikToker and Twitch streamer Joshua (@sg_exel), he shows a video of his Twitch homepage, saying that his recommended videos are just “tits.” The text overlay reads, “Remember when Twitch was for us gamers and nerds alike?”

In a stitched video posted by TikToker and fellow Twitch streamer Nolan (@thatguynolan_) on Tuesday, he says that the Twitch homepage algorithm is based on user behavior, showing his own recommended videos based on his searches and viewing history.

“My brother in Christ, I know you think you’re on to something, but those are literally the channels that Twitch thinks you’ll like,” Nolan responds to Josh’s video. “By no means is it wrong to enjoy the booby ASMR streamers, but you can’t complain about them when you’re evidently watching them quite a bit because it’s all Twitch recommended you.”

Nolan’s video has reached over 372,000 views as of Wednesday, with commenters discussing Josh’s reaction to his recommended videos.

“Like I’m a queer woman and I don’t get those…. Like buddy that’s on you man,” one user wrote.

“Homie got caught in 4k,” another exclaimed.

Another commenter recommended that Nolan open a new Twitch account to see what the platform would put on the homepage of a new user. In a response video, he opened up a new account in an incognito browser, showing that there was “not a booby in sight so far” on the homepage.

Responding to the multiple TikTok call-outs, Josh says he believes that his Youtube history may have played a role in Twitch’s recommendations, showing an ASMR channel that he is subscribed to. He also shows the streamers he follows on Twitch, saying that they have a “very different audience” than the videos being pushed on his homepage.

However, many commenters say that his Youtube subscriptions wouldn’t affect the Twitch algorithm, claiming that it is based on “watch history” and not just who he follows on Twitch.

“It’s not just based on the channels you follow. It’s based on what you watch. And it’s also not based on a single YouTube channel subscription,” one user wrote.

“It’s based on what you watch and who you interact most with. I’ve never once been recommending a channel like this bc I don’t watch them,” another said.

“It’s cowardice and straight-up projection to watch these channels and then blame twitch and the woman for why,” a third added.

In a follow-up video addressing a TikToker who “insulted” and called him out on his original, now-deleted TikTok, Josh says he has no problem with women producing sexual content but doesn’t “believe that kind of content should be on Twitch at all.”

Josh also says that he is frustrated that Twitch is allowing sexual content like the streams on his homepage because he claims it goes against their community guidelines. According to Twitch’s community guidelines, the platform “restricts content that involves nudity or is sexual in nature.”

While some commenters agree that Twitch has moved away from its original reputation as a streaming platform strictly for gamers, others suggest that all content platforms naturally “evolve” in what’s popular amongst viewers over time.

“Everything evolves you gotta learn to deal w stuff ex. discord was made for gamers and now it’s used for a multitude of different reasons,” one user said.

“I mean I agree. but everything changes and evolves with time. twitch being one of them,” user Mary Elizabeth wrote.

The Daily Dot reached out to Nolan via TikTok comment and to Josh and Twitch via email.