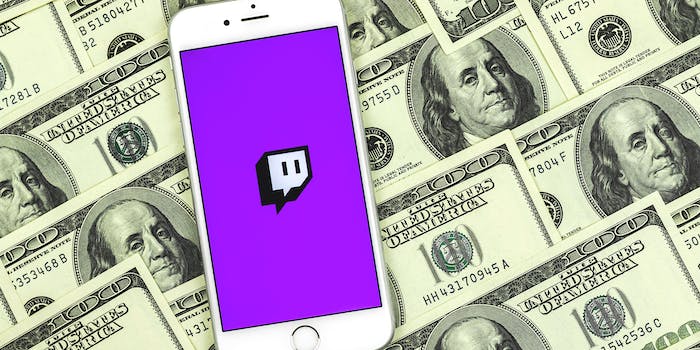 A large trove of data has been leaked from the streaming service Twitch. The data reportedly includes the entirety of Twitch, including its source code, creators’ earnings, and an unreleased Stream competitor from Amazon Game Studios. It’s not clear if it was leaked or hacked.

A link to the data, first reported by Video Games Chronicle, was posted by an anonymous user on 4chan. They shared a link to a 135 gigabyte Torrent file called “Twitch leaks part one,” implying that more may be released in the future.

“Our teams are working with urgency to understand the extent of this,” Twitch tweeted. “We will update the community as soon as additional information is available.”

A screenshot of the original post on 4chan, which appears to have been deleted, says that they were partially motivated by an abhorrence of the culture on Twitch.

“Their community is also a disgusting toxic cesspool, so to foster more disruption and competition in the online video gaming streaming space, we have completely pwned [sic] them, and in part one, are releasing the source code from almost 6,000 internal Git repositories,” it said.

They added that the data includes the “entirety of Twitch.tv, with commit history going back to its early beginnings,” “mobile, desktop and video game console Twitch clients,” “every other property Twitch owns,” and more.

The leak reportedly doesn’t include personal account information or passwords. Nevertheless, people are being encouraged to change their passwords and enable two-factor verification.

The post included a photo of Amazon founder Jeff Bezos.

“Jeff Bezos paid $970 million for this,” they said, referring to the price Amazon paid for Twitch, “we giving it away FOR FREE.”

They concluded with #DoBetterTwitch, referring to a campaign urging the company to do more to police harassment known as hate raids. Creators recently took a day off the platform to protest its alleged inaction. Last week, the company announced new tools to combat the issue, the BBC reports.

After the original post was deleted, another identical post appeared on 4chan called, “Amazon paying mods to delete the threads edition.”

Though the scale of the leak is enormous, thus far, most attention is being paid to streamers’ incomes.

Charts circulating on social media and posted to 4chan shows that top creators are earning millions from Twitch alone. This doesn’t include additional earnings from sponsorships, donations, etc.

“People really shocked at these Twitch payouts? Where did you think the 50% they take from all the smaller creators went,” Justin Chandler tweeted.

Streamers themselves have reacted to the leak with a mix of horror and jokes.

Several creators are already capitalizing on the leak.

“Twitch, I am live right now being relentlessly SHIT ON by my community for being ‘poor’ THANKS @Twitch,” tweeted Nmplol.

“True fans will make sure I’m in the top 10 next time Twitch payouts get leaked,” Foolish Gamers tweeted.

It’s not yet known when or if more of Twitch’s data will be released.