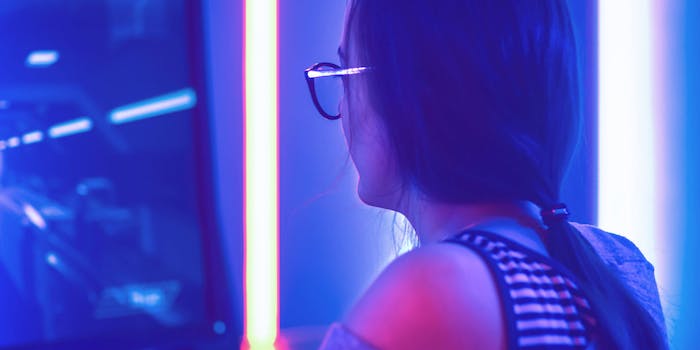 There's a rule on female-presenting nipples, too.

Amazon’s immensely popular streaming service Twitch has updated its guidelines for sexual content, and they may put marginalized streamers at risk.

On Tuesday, Twitch announced that the site’s community guidelines were revised “for more transparency” on nudity and sexual material. The clothing guidelines now explicitly ban “exposed underbust,” and clothing must hide “the area extending from your waist to the bottom of your pelvis and buttocks,” alongside genitalia.

The guidelines even include a “female-presenting nipples” line, not unlike Tumblr’s NSFW ban in December 2018. “For those who present as women, we ask that you cover your nipples,” Twitch’s guidelines say.

Twitch says the changes were implemented after streamers complained the site’s policies on nudity and appropriate stream attire were too vague. “We’ve outlined these minimum levels of coverage to increase clarity on expectations, so you’re not left guessing what is or is not acceptable,” Twitch wrote. Streamers’ virtual avatars are included in this requirement.

However, Twitch’s updated guidelines on sexual content rules include additions that some streamers fear is an overreach. Twitch now bans any content or camera angles that “focus on breasts, buttocks, or pelvic region,” as well as pole dancing and similar aerobatic dancing “with sexually suggestive framing.”

Because Twitch categorizes VRChat, a multiplayer virtual reality platform, as a game, fans and streamers are concerned about how the updated rules will impact streams. Any players the streamer comes across do not need to follow the new clothing rules, but streamers’ avatars seemingly must abide by the policy. Additionally, streamers cannot play VRChat in worlds where “nudity, pornography, sex, or sexual violence” are major components of play. It remains unclear what “sex” or “sexual violence” specifically means, given sites like Patreon consider forced transformation content and nonconsensual hypnosis fetishism to both be “sexual violence.”

“I am now officially squeamish about dealing with the game in my former capacity,” one Twitch streamer wrote. “I’m not worried about my avatars because I’m usually an insect, chungus, or knuckles. I am, however, worried about other people whose avatars I have no control over. Conflicted.”

It also remains unclear whether Twitch’s new guidelines could impact queer streamers and sex workers doing safe-for-work streams. Because the streaming service bans streams with a prominent focus on users’ breasts, users who rely on suggestive imagery for their streams could be penalized. Queer streamers working with kink-coded material could also be impacted by Twitch’s ban on “fetishizing behavior or activity.”

Nikatine, a Twitch partner and ambassador, says her online aesthetic sometimes plays with transformation and hypno kink aesthetics, but she takes “extra care” to ensure her brand is appropriate for the site. Even though her presence on Twitch “never claims to be sexual or overt,” she still has major concerns with the new rules.

“Some people are really into stuff like watching women smoke vapes—is that allowed, or is there gonna be a moratorium on women smoking vapes?” Nikatine told the Daily Dot. “There are people who are into every conceivable thing on the internet—how do you enforce such a nebulous term as ‘erotica’ or ‘Fetishising Behavior?’ It just seems like such a weird hill.”

As a trans streamer, Nikatine stresses that her identity is fundamentally sexualized online, and so people like herself may be targeted on broad terms for “fetishizing behavior or activity.”

“Trans people are some of the most sought after people on livestreaming sites. If Twitch starts banning what it considers ‘fetish’ content, where does that put me? Where does it put anyone?” she said. “In a world where there is something for everyone on the internet, and literally anything can be construed as a ‘fetish’ for somebody, what does that mean for me, for you, or thousands of other content creators? I guess it remains to be seen.”

“Was there, until last night, a scourge of sexy content creators? A horde of erotica-reading, underbust-showing ‘people who identify as women’ abusing Twitch Watch Parties? No, of course not. The timing seems strange,” Nikatine said. “And again, it’s good to have clarification—clarification helps people fight a ban, for instance. But it seems this particular addition went a bit further than perhaps it needed to go.”

The Daily Dot reached out to Twitch for comment.