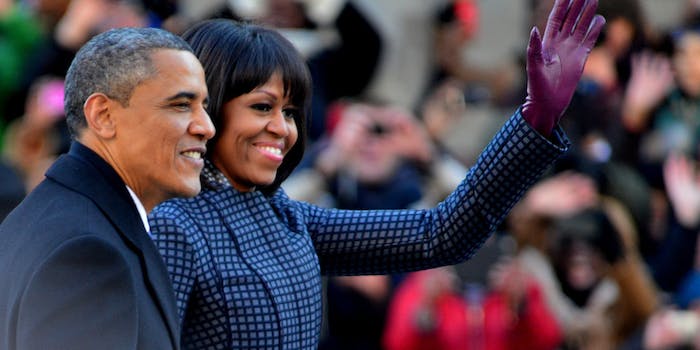 The one thing everyone forgets about Obama’s legacy

Michelle Obama's "Turnip for What" is more than a funny video. It's a crucial part of what makes him a great president.

Unlikely though it might seem, First Lady Michelle Obama’s new viral video “Turnip for What” is more than just a silly video that parodies a hip-hop hit to teach Americans about the joys of eating the titular vegetable. Indeed, even as pundits continue to debate Paul Krugman’s controversial Rolling Stone article detailing Barack Obama’s policy successes and arguing that they place him among America’s greatest presidents (a claim with which I completely agree), “Turnip for What” is being dismissed as a humorous novelty.

This may not be surprising, but it doesn’t change the fact that “Turnip For What” highlights an aspect of Obama’s legacy overlooked by the aforementioned editorial—namely, how the Obama administration pioneered new ways of using the Internet (both as a tool for communication and a hub of a distinct “digital age” culture) to achieve its electoral and policy goals.

Although the Internet was commercialized near the end of George H. W. Bush’s presidency (thanks to a little-known legislative initiative by Senator Al Gore of Tennessee), Obama was the first president to use it as more than an extension of “real world” apparatuses for political mobilization (such as successfully employed by George W. Bush in 2004). When he was accused of being a “celebrity” during the 2008 election, it was a testament to just how completely his campaign had mastered the Internet as a tool for strengthening their candidate’s political brand.

Much has already been written about Obama’s use of social media sites like Facebook and Twitter was instrumental to convert and mobilize millennials in his victories over Hillary Clinton, John McCain, and Mitt Romney. Just as important, however, were the numerous ways his supporters used the Internet to control the narrative of his presidential bids.

Major developments in the 2008 and 2012 elections occurred because of the Internet’s potential as a medium for galvanizing support and leaking information, whether it was the Obama campaign making sure his most inspiring public statements became viral hits, will.i.am and other celebrities cementing their candidate’s status as a pop culture icon by creating a music video out of quotes from his now-famous “Yes We Can” speech, or an obscure Florida bartender embarrassing Romney by surreptitiously recording and publishing (through Mother Jones) his notorious “47 percent” remarks.

This brings us to 2014. While the Obama campaign wasn’t responsible for the “Yes We Can” or “47 percent” videos, “Turnip For What” isn’t even the Obamas’ first viral video this year. Back in March, Obama incurred considerable criticism for encouraging young people to sign up for the Affordable Care Act’s insurance exchanges by appearing on Between Two Ferns with Zach Galifianakis. This gambit, which some alleged undermined the dignity of the executive by allowing the president to be openly insulted in a satirical interview sketch, paid off when the novelty of his appearance on a popular online show led to a spike in traffic to Healthcare.gov and helped the administration reach its enrollment goals.

Even if Michelle Obama’s attempt to inspire a healthy eating craze is less successful (it will certainly be harder to objectively quantify), the popularity of her video shows that the White House knows how to control the news cycle by finding innovative ways to use the Internet.

Then again, innovative use of technological advances in political campaigns is an American tradition as old as the republic itself. In The Midst of Perpetual Fetes, historian David Walstreicher’s acclaimed monograph on political rituals in the early American republic, identifies the 1800 presidential election between Thomas Jefferson and John Adams as an early turning point. “At the turn of the nineteenth century, elections were both annual and seasonal,” Walstreicher explains, thanks to a vibrant and festive approach to politics that treated local elections as a form of popular entertainment.

In the hotly contested battle over John Adams’ reelection, this celebratory atmosphere trickled up to the national stage for the first time, with Jefferson’s Democratic-Republican Party taking advantage of both the newspaper boom and America’s advanced federal postal system to speak directly to ordinary voters who, during the Federalist-oriented presidency of George Washington and the actual Federalist presidency of John Adams, had often felt they were expected to defer to “elites” in making political decisions. The partisan literature became so vicious that it even prompted President Adams to launch a direct attack against the First Amendment through a bill outlawing much of the political literature as “seditious.”

The use of political rallies and partisan newspapers was further sophisticated in the presidential campaigns of Andrew Jackson in 1828 and William Henry Harrison in 1840, both of which used the press to create carefully constructed narratives that depicted their candidates as common men with rustic virtues and their opponents as elitists. Although these characterizations weren’t always accurate (Harrison was a plantation aristocrat while his opponent in 1840, President Martin Van Buren, was a lifelong Jeffersonian who had been born in a tavern), they still brought about the largest increases in voter turnout ever, with the percentages jumping from 27 percent to 58 percent between 1824 and 1828 and from 58 percent to 80 percent between 1836 and 1840.

Similarly, Jackson used newspapers to increase the power of the executive office in 1832 by writing his colorful message vetoing the Second National Bank with a newspaper-literate audience in mind. By the time the Samuel Morse was famously demonstrating that the telegraph could communicate over long distances in May 1844, Americans weren’t at all surprised that Morse followed his histrionic first telegram (which proclaimed “What Hath God Wrought”) with an inquiry as to the results of that year’s Democratic National Convention (which nominated James K. Polk). Communications technology and politics had been intertwined for so long that Americans could take the relationship for granted.

As newly constructed railroads and transportation infrastructure continued to crisscross the continent during the nineteenth century, Americans would occasionally be treated to the spectacle of a presidential candidate who attempted to win votes by appearing directly before the voters instead of choosing surrogates to stump on their behalf (as had been traditional). Not coincidentally, the few major party nominees willing to do this were the ones whose political careers had been rooted in charisma instead of substance, thus giving them good reason to hope that the “personal touch” might help them—most notably Republican James G. Blaine in 1884 and Democrat William J. Bryan in 1896.

The first sitting president to use the same approach was Theodore Roosevelt, whose larger-than-life persona made him a superstar. Of course, like Blaine and Bryan, Roosevelt’s goal wasn’t only to shake as many hands and kiss as many babies as humanly possible; by inviting journalists to cover everything from his stirring whistle-stop orations articulating progressive ideals to his numerous hunting adventures (including a bear hunt in 1902 that, thanks to embellished reports, inspired the teddy bear), he created a cult of personality grounded in the newspapers’ breathless accounts of his whirlwind adventures, energy, and accessibility.

The invention of radio brought on the next phase in the history of American politicking. Although Warren Harding was the first sitting president to deliver a nationally broadcast speech, it was Franklin Roosevelt’s so-called “fireside chats” that maximized the political potential of that medium. Inheriting a country ravaged by the Great Depression and convinced that its leaders had grown calloused to the suffering of ordinary Americans (especially FDR’s immediate predecessor, the hopelessly dour Herbert Hoover), Roosevelt delivered a series of radio addresses that projected confidence, warmth, and candor, giving Americans an unprecedented sense of familiarity with their president.

In the process, he not only restored the prestige of the office but made it impossible for any future president to hope for political success without establishing a direct connection of their own with the American people.

What Roosevelt did for radio, Dwight Eisenhower, John Kennedy, and Richard Nixon did for television. In his 1952 presidential campaign, Eisenhower hired some of the best ad men on Madison Avenue to create a series of infectiously memorable and upbeat TV spots that are considered today to be the first successful presidential campaign commercials. Meanwhile, his running mate, Richard Nixon, used the medium to diffuse a political scandal that nearly cost him his spot on the ticket (through his shrewdly emotional “Checkers speech”).

The next milestone event was the first presidential debate between John Kennedy and Nixon in 1960, in which Kennedy was widely perceived as the “winner” because he looked better on television than the haggard Nixon, even though polls of Americans who had only heard the debate over the radio either found that Nixon had won or declared it a draw.

By the time televised presidential debates were brought back for good in 1976 (the favorites in the 1964, 1968, and 1972 elections, Lyndon Johnson and Nixon, remembered the lessons of 1960 and avoided jeopardizing certain victory with an embarrassing performance), television had more or less finished its work in changing the practice of American politics, from the rise of media handlers to the increasing role of the early primary states in determining each party’s eventual nominee (caused by television’s tendency to award “momentum” to the candidates who either win or do unexpectedly well in the first states).

Like the print press, radio, and television, the Internet has been a game-changer in American politics. It has fundamentally altered not only how the average voter processes information about the larger world, but forces candidates to develop skills and adopt strategies so that they can succeed in the distinct culture of the digital age, a culture that can be reached with appeals to idealism (such as in Obama’s 2008 campaign), outrage (see the response to the “47 percent” tape), and even humor (see the Obama White House’s humorous videos this year).

Obama has been as much a trailblazer in his use of the Internet as Jefferson and Jackson were in using the print press, or Franklin Roosevelt was in his use of radio, or Dwight Eisenhower and John Kennedy were in their use of television. While it’s too early to foresee exactly how Obama’s successors will avail themselves of the medium, it’s likely that we’ll be seeing plenty of political videos like “Turnip for What” in the foreseeable future.