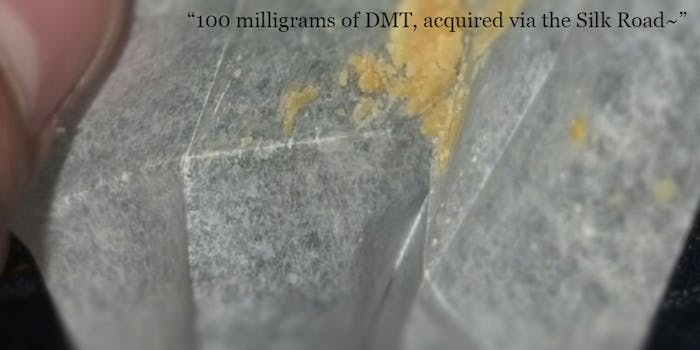 Meet Alec, a 17-year-old from Michigan. He bought some DMT from Silk Road. Why do I know about it?

Silk Road, the Dark Web drug marketplace made famous in 2011, is a global success. It’s doing tens of millions dollars in business every year. New customers walk in every day.

Silk Road is so successful at this point that teenagers are flooding in to take advantage of the easy-to-use black market. Some Silk Road users are indistinguishable from kids in a candy store, so excited by their new mind-altering purchases that they hurry to post pictures and descriptions to Tumblr.

For young people in 2013, oversharing is a given. But uploading evidence that you bought drugs from an anonymous black market is, well, an odd choice.

Silk Road’s ultimate goal is to create a world where you don’t have to hide the fact that you enjoy recreational drug use. But let’s face the facts: We don’t live in that world right now. Novel-length guides to anonymity and security have been written by Silk Roaders in an effort to stop law enforcement from ever identifying vendors or buyers.

Who needs all that? Let’s tweet about our new 50 grams of ecstasy!

Meet Alec, a 17-year-old from Michigan. He ordered DMT, a powerful psychedelic drug, from Silk Road in May and was so pleased with his purchase that he blogged about it. It’s hard to blame Alec if he made the post when he was high as a kite. But it’s been four months now, and the post remains up as a monument to his illegal activity. He’s left a selfie in the top left just to make the job that much easier for anyone who wants to identify him. 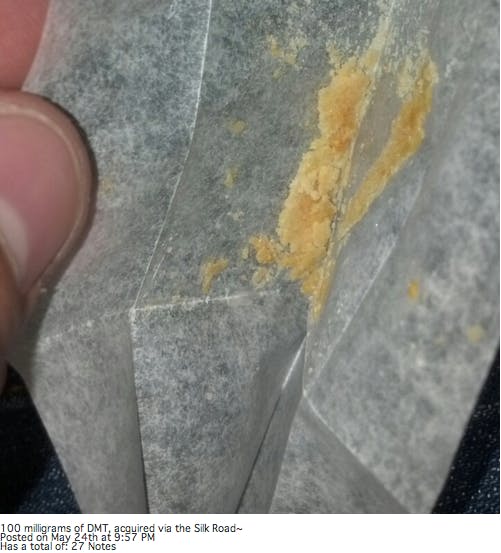 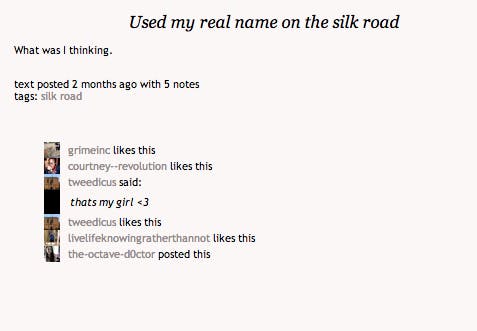 Juan has a question about ordering to a city already famous for its drug history:

Jenna announced that she was going to make a purchase:

Alex, an 18-year-old skateboarder from Wilmington, Del., has a couple of distinct tattoos. He takes advantage of the #silkroad hashtag: 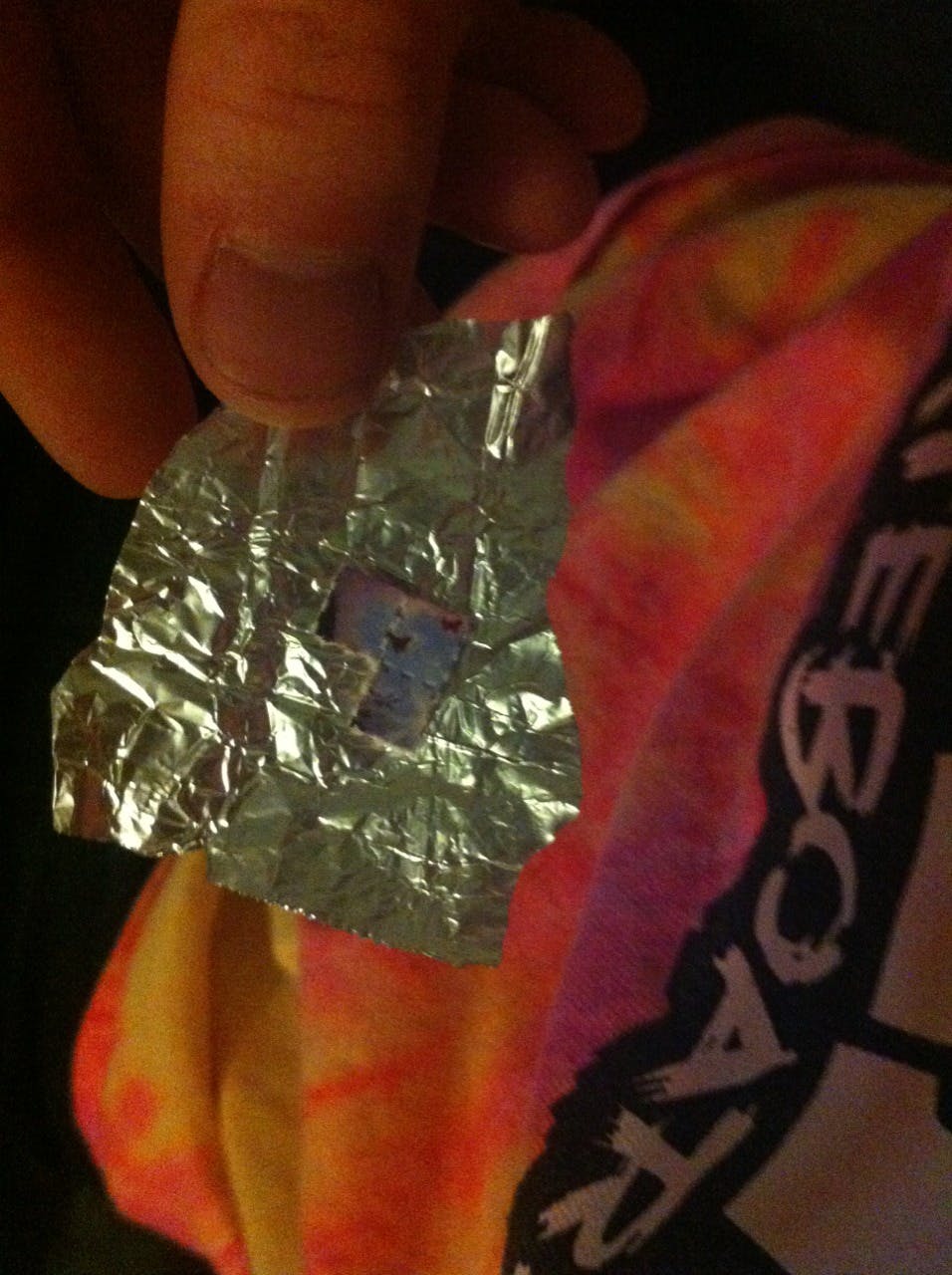 Pat writes in detail about his Silk Road purchases in his notebook and then shares it with the world: 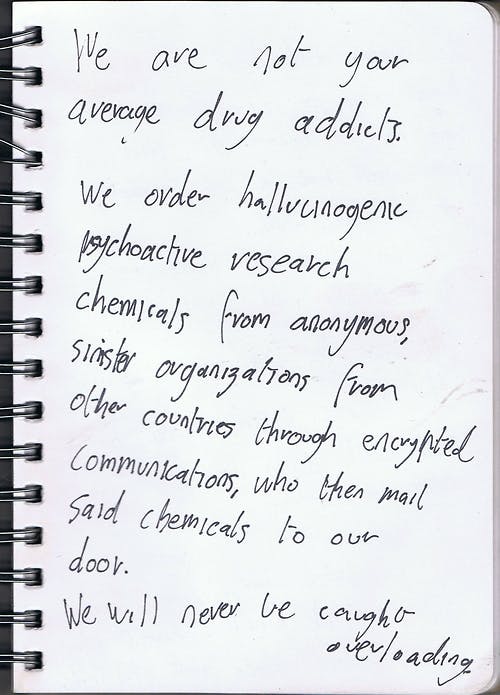 Finding these people’s real identities is not difficult. There is precious little detective work that actually needs to be done. Most of them supply their name, age, location, and pictures beyond count. Yes, they’re mostly selfies. Almost all of them regularly interact with real-life friends who can be a source of important details, making it easy to narrow down the search. Some of them are kind enough to go into even further detail by serving up their schools and jobs alongside the pictures of their latest Silk Road pickup. It’s a kindness that any investigator would greatly appreciate.

Teenagers and 20-somethings on Tumblr routinely offer advice about Silk Road and even implicate girlfriends and boyfriends in their crimes. Hundreds have asked publicly how to use Silk Road. The typical response is a nonchalant admission of guilt.

“I’ll ask my boyfriend. He handles this stuff,” writes Sara from Virginia, complete with pictures of herself and identifying details all over her blog. I wonder how her boyfriend feels about that.

It’s not always as simple as revealing a name. Magickarpets, a Tumblr user whose picture is prominently featured on his site, posted his recently arrived “pure molly courtesy of the Silk Road” complete with packaging. Sure, the post could be used to connect the Tumblr to drugs—but that specific Silk Road vendor should be the most annoyed. The distinct package design could reveal the source of his MDMA to any curious souls with a badge.

There’s no denying that Silk Road has attracted a considerable number of teenagers. Recently, a Xanax vendor was graced with this review: “5/5, package came on schedule. My dad intercepted the package though, so no Xanax for me!”

Maybe it’s not a big deal. After all, cops will go after the big sellers on Silk Road, right? Why would they bother with a customer like little old me?

Actually, Silk Road customers do get caught, arrested and put on trial. It’d be a hell of an embarrassing moment to have old Tumblr posts brought up as evidence against you.

It’s not just law enforcement they ought to worry about when posting evidence of drug transactions to Tumblr. Everyone has access to the site. They realize that, right? Employers, ex-boyfriends and girlfriends, professional and personal enemies can all use this information against them for the rest of their lives.

Occasionally, Silk Road users contact less cautious bloggers. They demand, urge, plead with the oversharers to take down the pictures and posts. One notable incident earlier this year saw a young woman who bought heroin on Silk Road remove a post filled with pictures of her order and package next to pictures of herself. Numerous Silk Roaders had sent private messages to her.

But most of the time, the pictures stay up.

Not much really leaves the Internet these days, least of all your drug posts on Tumblr. Thanks to tools such as the Wayback Machine, a picture of DMT next to your unsmiling face may end up outliving you.

The debate on Silk Road has been, perhaps predictably, not about whether or not a teenager should be allowed to do drugs but whether or not they should order to their home and put their parents in such a threatening position.

“If you’re a minor living in your parents home, it is horribly unfair to put your parents or anyone else you reside with at risk,” wrote redditor casablanka. “If they open the door and sign for the package, they are just as liable for what’s inside as you are.”

A 14-year-old from Indianapolis is the youngest Silk Road customer arrested so far after his parents found an ecstasy shipment and turned him in.

The drug use and admissions of guilt are in no way limited to Silk Road. Just take a stroll down the heroin aisle of Tumblr. When they don’t even hide their name, they probably don’t mask their IP address either.

Silk Road, simply by nature of being online and a total novelty, is most prominent on social media. Thanks to the magic of Tumblr, you can watch in real time as kids discover it, explore it, and use it. Just don’t tell the cops. They don’t know about Tumblr yet, right?