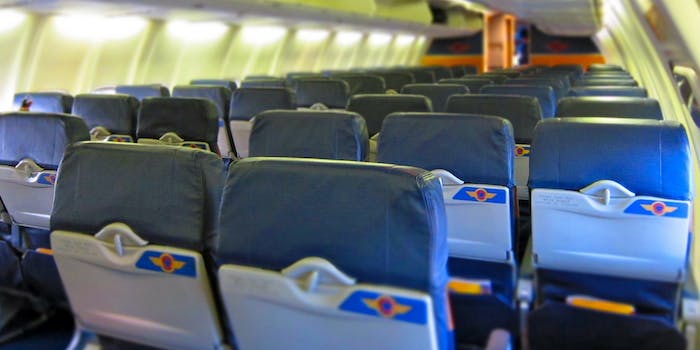 For transgender travelers, routine screenings at the airport are a routine nightmare.

On Tuesday evening, television producer Shadi Petosky headed to the Orlando airport to fly home to Minneapolis after a brief vacation to Disney World. What should have been a routine security screening quickly turned into a terrifying and humiliating ordeal at the hands of the TSA agents and American Airlines. Petosky was asked invasive questions about her genitals in a private screening room she was told she could not photograph and missed her flight—all because she is transgender. Petosky live-tweeted the entire ordeal, and the transgender community and LGBT rights groups are in an uproar over Petosky’s harassment.

I literally want to no lectures from American Airlines on how to travel while trans. I want the same privileges as cis people.

When the police officer asked me what sex I was I told him I wasn’t to respond. He said this was not a game. Are trans civil rights?

I am finding out this is completely routine for so many trans people.

Unfortunately, this is far from an isolated incident. Trans people face numerous dangers while traveling—though the way we are treated by the TSA is often some of the most egregious abuse we face. An investigation by Al-Jazeera America into the TSA’s own records revealed that trans passengers are regularly subjected to unusual levels of scrutiny during the screening process. The TSA is currently being sued by the National Center for Transgender Equality for its disrespectful policies—particularly in regards to the body scan process. These scans are based on a “typical“ body configuration tailored to cisgender men’s and women’s bodies, resulting in what the TSA terms “anatomical anomalies.” These must be resolved by pat downs or other, more humiliating methods.

TSA officials have defended the actions of the agents involved in Tuesday’s incident, claiming “the evidence shows our officers followed the TSA’s strict guidelines.” What Petosky’s experiences and the official response have highlighted is a situation many other advocates have been making clear for years—the TSA is woefully behind the times on transgender issues, and it’s putting trans people at risk of emotional trauma, physical violence, and financial hardship every single day.

The TSA is no stranger to lawsuits when it comes to trans inclusion. In 2011, a transgender TSA employee was awarded damages after she was forced to present male at work, harassed by supervisors and coworkers, and eventually fired for using the women’s bathroom. As a result of the suit, TSA management in Los Angeles were forced to take sensitivity training on trans issues. Unfortunately, the bulk of the 47,000 TSA agents working in screening passengers still receive no training in appropriate treatment of trans people, and the TSA’s policies regarding trans passengers are vague at best.

Sadly, transgender people have come to expect this routine discrimination. The 2011 National Transgender Discrimination Survey showed that more than 20 percent of trans people had experienced unequal treatment from a government employee, and almost 30 percent had been harassed or mistreated by law enforcement.

Trans people face numerous dangers while traveling—though the way we are treated by the TSA is often some of the most egregious abuse we face.

For transgender people, this expectation of abuse makes every screening a anxiety-inducing experience—which actually subjects us to even more screening. If you’re acting nervous or uncomfortable, you’re more likely to be subjected to “behavioral” screening techniques employed by TSA. Given the intense dysphoria that many transgender people experience about their bodies and the fact that many trans folks have been victims of sexual violence, these methods can be intensely triggering. That trauma—as well as frequent misgendering employees—can have lasting effects on our mental health.

More dangerous, however, is what potential lies ahead for transgender people after they have been subjected to mistreatment—harassment and violence at the hands of other people in the airport. In many incidents reported by trans passengers, TSA agents essentially outed them as trans to any other passenger within earshot (which I’ve personally experienced several times). In the best-case scenario, this means rude comments and awkward stares. At worst, it makes transgender people into a target for further abuse or violence. The continued panic over trans folks in public restrooms only makes this danger even more potent.

The situation also places trans people in a potentially desperate economic situation. After a lengthy delay for additional screening, neither the TSA nor the airlines have mechanisms to ensure free changes for those who might be forced to take a later flight—as Shadi Petosky did.

As Petosky pointed out, she was very fortunate to have the financial means to quickly book and pay for a new ticket—however unfair that requirement may be. However, large swaths of transgender community face significant financial insecurity or live in poverty, particularly trans women of color.

For financially at-risk trans people, it means many may lack the means to get home. It could entail one or more days of missed work—and lost pay—or worse yet, losing their jobs. Given that trans people face considerably more difficulty finding and keeping full-time employment that pays a living wage, this could be devastating for them and their families. It is absolutely unacceptable for the TSA to risk the financial well-being of an already vulnerable population over a discriminatory security concern about between their legs.

Sadly, transgender people have come to expect this routine discrimination.

Critics may suggest that Shadi Petosky and other trans people who have experienced similar situations didn’t make enough effort to disclose their situation to TSA officials—and in fact, dozens of people on Twitter have harassed her for exactly that. But the fact of the matter is that cisgender people don’t experience anywhere this level of risk and aren’t required to discuss their genitals. It’s unfair to force every trans person who passes through an airport to be prepared to give a Trans 101 talk to the TSA screeners. That’s the job of the TSA leadership, and it’s something trans rights groups have been offering to assist with for years—with their pleas largely falling on deaf ears.

It’s time for the TSA to move into the 21st century and ensure its officers are appropriately trained to treat every member of the public with the respect they deserve. The TSA also needs to make some long-overdue modifications to the technology it uses to screen passengers—in order to account for the wide diversity of bodies that pass through its lines every day. But most critically, it’s time to add some transparency to the process, reassuring passengers that they will be treated fairly and consistently every time they fly.