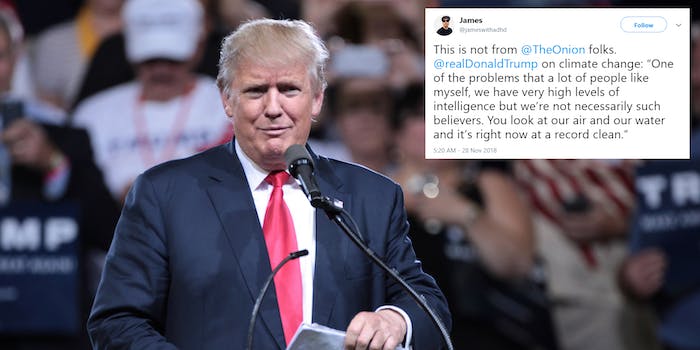 President Donald Trump continued to cast doubt on the effects of climate change, claiming that his “very high levels of intelligence” have given him pause about the issue.

The president boasted about his intelligence–something he’s done several times in the past–during a wide-ranging interview with the Washington Post published on Tuesday.

When asked about a climate change report released by his administration last week, the president did not seem to agree with its findings. Earlier this week, he said something similar, saying he didn’t “believe” in the report’s findings.

“One of the problems that a lot of people like myself—we have very high levels of intelligence, but we’re not necessarily such believers,” Trump told the Post. “You look at our air and our water, and it’s right now at a record clean… As to whether or not it’s man-made and whether or not the effects that you’re talking about are there, I don’t see it—not nearly like it is. Do we want clean water? Absolutely. Do we want clean air to breathe? Absolutely.”

“Very high levels of intelligence” is he a comedian now? https://t.co/kj7lpjrTmA

"We have very high levels of intelligence … Oceans are very small." – The dumbest president ever https://t.co/vNfeviyIKd

“One of the problems that a lot of people like myself, we have very high levels of intelligence but we’re not necessarily such believers,” Trump said. “You look at our air and our water, and it’s right now at a record clean.”
Donald J. #Trump in the Washington Post, today. pic.twitter.com/kWud8xIFTy

In the interview, Trump also said that oceans are “very small,” which prompted another round of roasting.

Oceans are very small? Has he seen a globe? Can we all collectively just start mailing globes to the WH circling the oceans for him? https://t.co/A92PU4nEcb

… the president of the united states: "oceans are very small." https://t.co/dy4dj7LWxA pic.twitter.com/lnR7LLZ8k7

On climate change, @realDonaldTrump said: "When you’re talking about an atmosphere, oceans are very small," in today's interview with the @washingtonpost. Pictured below: the Pacific Ocean. pic.twitter.com/Wyygjej5xt

You can read all of the Washington Post‘s interview with the president here.