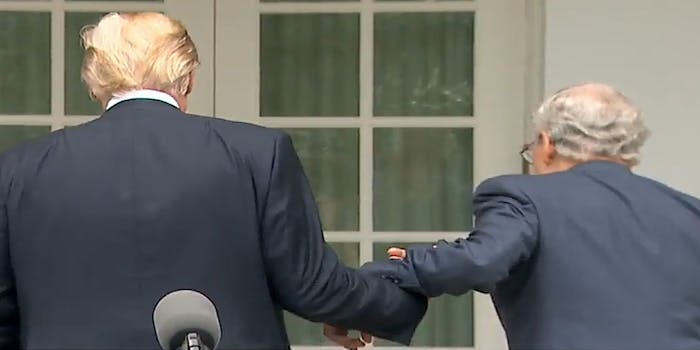 Today in the Rose Garden, President Donald Trump held a joint press conference with Senate Majority Leader Mitch McConnell, at whom Trump has directed some Twitter vitriol in the past. (Which, tbh, whom hasn’t he?)

While the conference brought about several bug-eye emoji moments (like Trump saying Barack Obama didn’t call the families of soldiers killed in action), it was the end of it that set everyone asunder.

Huh. What’s with the hand-holding? Were they celebrating the success of their press conference? Or was McConnell helping Trump because of somewhat specious rumor that Trump is afraid of stairs?

That’s a reference to the news today that Trump said his vice president wanted to hang gay people (what a day).

You: Did Trump and McConnell just holds hands?

Narrator: Yes, they did pic.twitter.com/8W28syymkU

But a lot of people went the stairs route. (In March, Trump held British Prime Minister Teresa May’s hand while walking down a ramp, prompting speculation that Trump was afraid of stairs and inclines.)

the president is incapable of stairs without assistance, but we're made to think he should have a nuclear arsenal https://t.co/um1g1nJTOe

He's scared of climbing stairs and/or ramps y'all. Did you not get the memo? https://t.co/cPaTeSNcB7

Either way, it’s clear it is McConnell offering Trump a hand. Did he know something? Or was this McConnell—forever painted as a Machiavellian political operator—trying to embarrass Trump, knowing this would become a meme? We’ll never know.