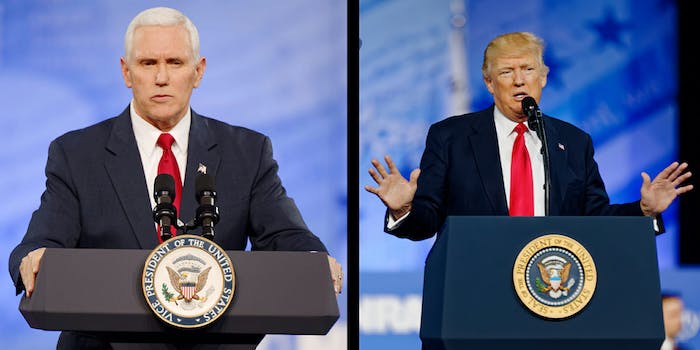 Trump tore into his vice president's religious views, according to a new profile.

Add President Donald Trump reportedly mocking Vice President Mike Pence to the list of embarrassing revelations to leak from inside the White House.

In a New Yorker profile, sources tell the magazine of several instances where Trump has mocked Pence’s ultra-conservative nature, including his views on social issues such as abortion and LGBTQ rights.

In once instance, where Trump and Pence met with a legal scholar, the president “belittled” Pence over his desire to overturn Roe v. Wade, the landmark Supreme Court case that essentially makes it legal for women to have abortions. When the scholar pointed out that if the case was overturned, states would just legalize abortion on their own, Trump reportedly went in on Pence.

“You see? You’ve wasted all this time and energy on it, and it’s not going to end abortion anyway,” Trump told Pence, according to the magazine.

“Don’t ask that guy—he wants to hang them all!” Trump reportedly joked.

Trump also apparently likes to keep Pence in check and make sure he knows “who’s boss.” One of those ways is apparently mocking the vice president’s hard-line religious beliefs. One staff member on Trump’s campaign told the New Yorker that after people met with the vice president, Trump asked them, “Did Mike make you pray?”

You can read all of the New Yorker profile on the vice president here.