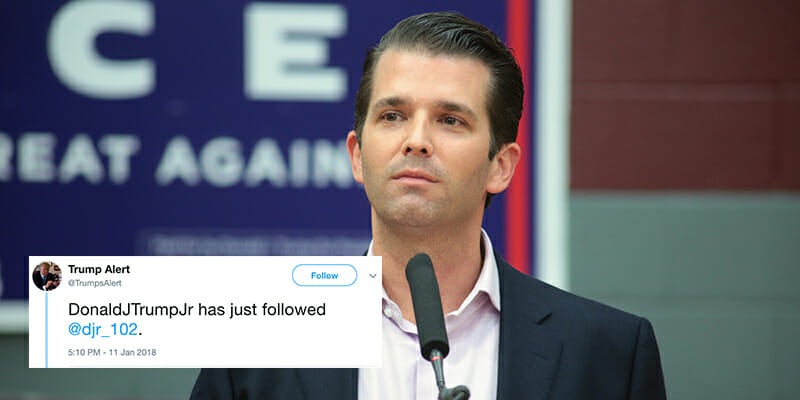 This actually appears to be a case of djr_102 being reactivated given that earlier the account disappeared? https://t.co/UGXvvfH2K6 https://t.co/CJq9kWCDVt

You get the idea. Anyway, it soon became clear that this was not a new follow for Trump Jr. It just looked new because of a Twitter quirk.

“This actually appears to be a case of djr_102 being reactivated given that earlier the account disappeared?” the person behind the Trump Alert account posited in a follow-up tweet. Vanilla’s last tweet before he deactivated, announcing he was going to “love and leave,” came on Dec. 21.

Scrolling through Trump’s list of followed accounts, which Twitter displays in chronological order, reveals that he must have followed Vanilla years ago. Since Vanilla was somewhere between the 700th and 800th person he followed, and he followed 800 people by 2015, it looks like he probably followed the account sometime that year.

The account shows up well before Trump started to follow Republican politicians, alt-right media personalities, and others associated with his father’s campaign. At the time, he was more into hunting, fishing, professional golfers, and Simpsons quotes:

It’s unclear who is Vanilla actually is, though, and why Trump Jr. followed him in the first place.

Despite the initials “DJR,” this doesn’t seem to be a case of Don Jr. following his own alternate account. Vanilla claims to be single, which Trump Jr. is not, and what appears to be a selfie on the timeline doesn’t look anything like Trump Jr. Vanilla also claims to be from Scotland and uses “mate” in his tweets.

This could just be a case of a man following a popular-ish, porn-ish account years before it would have had any political implications.  And, because he followed it before the Trump Alert account started, it wasn’t detected until the account disappeared and then reactivated.

Trump Jr.’s not the first public figure to learn the hard way about cleaning up his internet history. In fact, this isn’t even his first lesson. Feinberg, writing for Gawker in 2016, exposed a number of his old pseudonymous posts on hunting and fishing message boards.