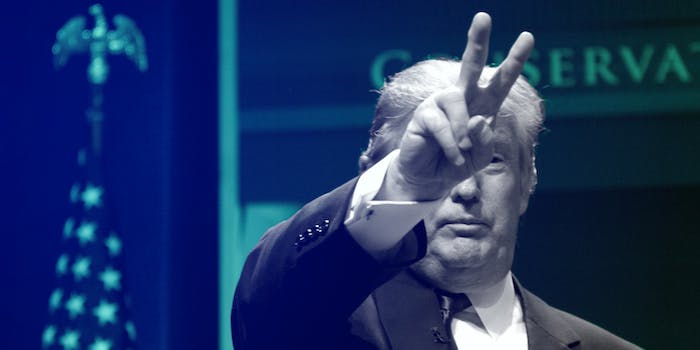 The GOP is making a major statement about who should live in America.

It’s long been the norm that anyone born in the United States automatically becomes a citizen of the country—since an act of Congress 1868, in fact. But recent arguments from the GOP presidential field suggest that maybe birthright citizenship isn’t so fundamental.

With the release of his immigration plan “that will make America great again,” Republican frontrunner Donald Trump just brought the idea to the forefront of the debate. Trump’s plan includes building a wall along the southern border, for which Mexico would foot the bill; creating criminal penalties for immigrants who overstay their visas; and mass deportation of all undocumented immigrants. The point in Trump’s plan that’s receiving the most attention, however, is his plan to end birthright citizenship, “the biggest magnet for illegal immigration.” Quickly, other GOP candidates, beginning with Wisconsin Gov. Scott Walker, began to agree: It’s time to change the 14th Amendment and repeal birthright citizenship.

Trump’s plan galvanizes his nativist base, which sees so-called “anchor babies” as inherently un-American despite their citizenship—and the conversation in the GOP primaries continues shifting to accommodate these sentiments. This debate, however, puts worrisome focus on the 14th amendment, as what was once an issue on the fringes of the extreme right enters the mainstream discourse. There’s also a real danger to this policy approach: Losing U.S. birthright citizenship would result in Dred Scott 2.0, and place the citizenship of people of color under unnecessary legal scrutiny.

Trump’s biggest competitor, former Florida Gov. Jeb Bush, doesn’t wish to see birthright citizenship repealed, instead favoring increased immigration law enforcement. But he opts to use Trump-like language when addressing the issue. On the conservative radio show Morning in America, as Politico reports, Bush stated that if “pregnant women are coming in to have babies simply because they can do it, then there ought to be greater enforcement.” Bush continued, “Better enforcement so that you don’t have these, you know, ‘anchor babies,’ as they’re described coming into the country.” When asked whether they were aware of the derogatory nature of “anchor babies,” both Bush and Trump declined to remove it from their language.

Any reform to the 14th amendment, if Trump or Walker have their way, would largely target and affect immigrants who aren’t white.

“Anchor babies,” though, are one of the most common misconceptions about immigration in the U.S. Immigration opponents and proponents alike often mistake the concept of children born to undocumented parents for a loophole in the immigration population, allowing them residency in the country. Unfortunately, that couldn’t be farther from the truth. The Washington Post reminds readers that “U.S. law requires those children to wait until they’re 21 to petition for their parents to be in the country legally (sic), with very few exceptions.”

Despite the the reality of laws regarding children born to undocumented parents, the nativist base of the Republican Party erupted on Twitter against “political correctness” insisting that Bush and Trump are just “calling it what it is,” as it were. The #AnchorBabies hashtag is rife with racist assertions that undocumented women urgently cross the Southern border—it’s always the Southern border—in the final days of their pregnancy to use the children to exploit the welfare system. The fervor over this new hot-button item highlights one major element in the debate: Any reform to the 14th amendment, if Trump or Walker have their way, would largely target and affect immigrants who aren’t white.

#AnchorBabies are like barnacles on the hull of our great American ship.

As the Root’s Theodore R. Johnson, III, writes, repealing the 14th amendment in this case “sounds an awful lot like a racist dog whistle, summoning the oppression from the slavery and Reconstruction eras that denied black Americans the right to citizenship.” Indeed, the adoption of the 14th amendment granted citizenship to freed slaves after Civil War, and its repeal would in effect create a scenario in which a large population of people born in America would have to fight to simply earn their citizenship and the agency that comes with it.

Similarly, revoking citizenship of people born to undocumented parents would strip them of their legal agency.

But perhaps, purely in theory, it’s not such a bad idea for one to earn their U.S. citizenship. However, when you take a step back and see the populations this would primarily affect—low-income people of color—it then begs the question of who GOP leaders want in this country. According to the Post, the Census counted 4.5 million U.S.-born children under the age of 18 living with at least one undocumented parent in 2012. Revoking their status as U.S. citizens would then bring the undocumented population up to 15 million and deny basic, supposed inalienable rights to a largely Asian and Latin American population. This move would essentially result in a 21st century version of Dred Scott.

In Dred Scott v. Sandford, the 1856 landmark ruling by the Supreme Court, black people in America, whether free or enslaved, were not considered citizens of the country. Similarly, revoking citizenship of people born to undocumented parents would strip them of their legal agency.

Jeb Bush signed memo saying not to use the term "anchor babies," offensive. Now he wants to use it because I use it. Stay true to yourself!

As @JebBush calls me & other kids of immigrants "anchor babies," a reminder that 2 of his 3 kids were born before his wife became a citizen.

But it’s still early in the race, and even if Trump or Walker were sitting in the Oval Office today, changing the Constitution and the 14th amendment would be an arduous task. An approved measure in Congress would require a supermajority vote, and then three-quarters of the population would have to vote in favor of the change.

At this point, it seems the GOP presidential primary candidates are playing a game of right-wing extremist chicken, seeing who can propose the most inanely conceived rollbacks to the Constitution. One thing’s for certain, however: Birthright citizenship must remain intact. Without it, the country could continue moving in the direction of overt disenfranchisement of the immigrant population, as well as a population of citizens born in the USA.