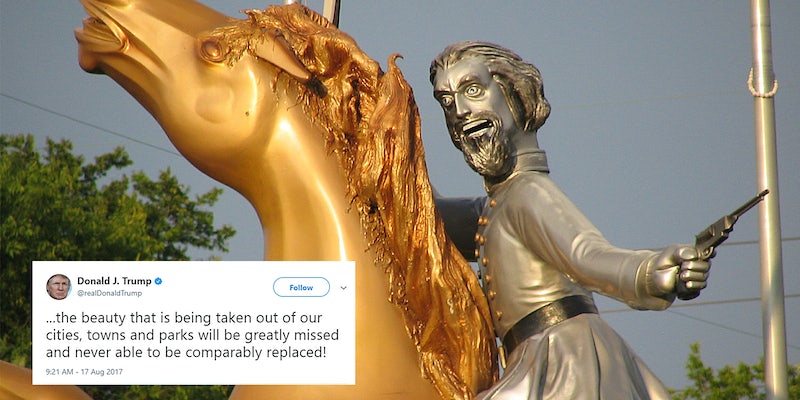 Look at all this beauty.

Cities across the United States are removing Confederate monuments this week following a white supremacist rally in Charlottesville that erupted in violence. The rally was prompted by the planned removal of the statue of Confederate army commander Robert E. Lee.

President Trump responded to the events by saying that “both sides” were at fault—equating people who shout Nazi slogans with people who are trying to fight hatred of other human beings. He went one step further on Thursday morning, tweeting that he was “sad” to see people tearing down statues.

Sad to see the history and culture of our great country being ripped apart with the removal of our beautiful statues and monuments. You…..

…can't change history, but you can learn from it. Robert E Lee, Stonewall Jackson – who's next, Washington, Jefferson? So foolish! Also…

…the beauty that is being taken out of our cities, towns and parks will be greatly missed and never able to be comparably replaced!

Many responses to Trump’s tweets were critical of the president’s comment that statues linked to the Confederacy, which lost the war, are “beautiful” and “will be greatly missed.”

apparently there's nothing quite so beautiful on this earth as a bearded white racist on a horse https://t.co/zTh5MMoXLq

If there's nothing more beautiful than statues of traitors then I don't want to live anymore https://t.co/FJ70ZFsMSZ

The sanitized version of 'You Will Not Replace Us'. https://t.co/DZVJPEI8Qa

Others noted that just earlier this month Trump aide Stephen Miller dismissed the poem at the base of the Statue of Liberty.

Reminder:
This month, the Trump administration slammed the base of the Statue of Liberty, and defended the statues of the Confederacy.

In just the past 2 weeks, the Trump White House has attacked the Statue of Liberty and defended a statue to Confederate Gen. Robert E. Lee. pic.twitter.com/OWlhWY3tuq

TRUMP: We must respect and honor our beautiful statues!

So much beauty in these statues. Just look at this one.

They're not even good statues. pic.twitter.com/dRQkFg23i6

That particular one got people especially riled up.

I thought it was the Burger King King. https://t.co/MOpHX9EgyQ

What happens when a silver dollar is dropped into the mouth? Does the head spin around? Does it emit a rebel yell? Don't leave us hanging. https://t.co/TU6L6lI9gD

America will become ugly if we take down this beautiful statue https://t.co/B7WZ3PCqof

Perhaps it will be a shame if that one goes.