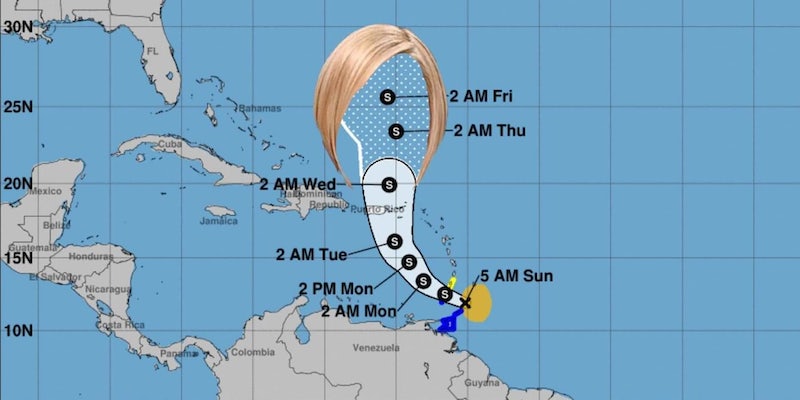 This probably wasn't the best name for a storm.

A tropical storm that formed in the Atlantic is currently moving north through the Carribean Sea toward the U.S. Virgin Islands and Puerto Rico. The storm currently has a maximum sustained wind speed of 40mph with gust up to 105, although it’s not expected to turn into a hurricane. While it’s certainly dangerous, it’s far from the worst the area has encountered. There’s just one problem. The storm is named Karen.

If you’re not up on your internet slang, the name “Karen” has become associated with a certain type of middle-aged white woman who’s likely to throw a fit if she doesn’t get her way. The top Urban Dictionary definition of “Karen” reads:

44. mother of three. blonde. owns a volvo. annoying as hell. wears acrylics 24/7. currently at your workplace speaking to your manager.

It’s unclear when or why Karen became the goto name for this kind of person. Know Your Meme speculates that it could be based on a quote from the 2004 film Mean Girls.  The film features a character named Karen (Amanda Seyfried) who asks Lindsay Lohan’s Cady, “If you’re from Africa why are you white?”

At any rate, when news about Karen hit the internet, it prompted Twitter to start cranking out jokes and Karen memes about how she is heading to Puerto Rico to speak to the manager.

Tropical Storm #Karen is headed to speak to the manager of Puerto Rico. https://t.co/0er5uwqbMi

Updated graphic on tropical storm #Karen and it is alarming. pic.twitter.com/aYlJLypzyi

Manager: *just going on about their business*

As for tropical storm Jerry, it’s currently heading towards Bermuda, where it’s expected to colonize the area and then complain about how the natives are lowering property values.