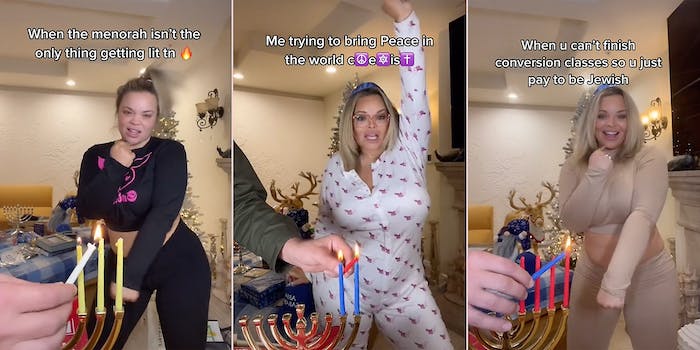 ‘This is beyond disrespect’: TikTokers criticize Trisha Paytas’ Hanukkah TikToks

Paytas pushed back at those 'gatekeeping religions and beliefs.'

Trisha Paytas addressed those “gatekeeping religions and beliefs” in response to criticism of a recent series of Hanukkah videos.

Paytas, who is engaged to Israeli artist Moses Hacmon, has been documenting Hanukkah on TikTok, starting with a video captioned “Me trying to seduce my Israeli husband.” The TikTok has more than 7 million views.

Since then, Paytas, who is not Jewish, posted more videos where they dance and Hacmon lights the menorah. The most recent TikTok is captioned: “When u can’t finish conversion classes so u just pay to be Jewish.”

One of the top comments is “trish collecting cultures like pokémon cards.” Others pointed out that you don’t pay to be Jewish and that’s not how conversion works.

On another Hanukkah TikTok, one commenter said: “Trish you can’t be collecting religions like they’re infinity stones,” perhaps referencing Paytas’ recent post about going to a “Hare Krisha temple for the first time,” and showing off what she bought.

On Wednesday, Paytas appeared to respond to the criticism: “It really sucks those gatekeeping religions and beliefs. RELIGION. CAN. NOT. BE. APPROPRIATED. culture can. Relics can. Apparel can. But if someone is seeking multiple religions to find their truth and purpose ….idk. Maybe just let them? God is for EVERYONE.”

She also addressed her visit to the Hare Krishna temple, saying they’ve “been nothing but loving open and welcoming. It really feels like home.”