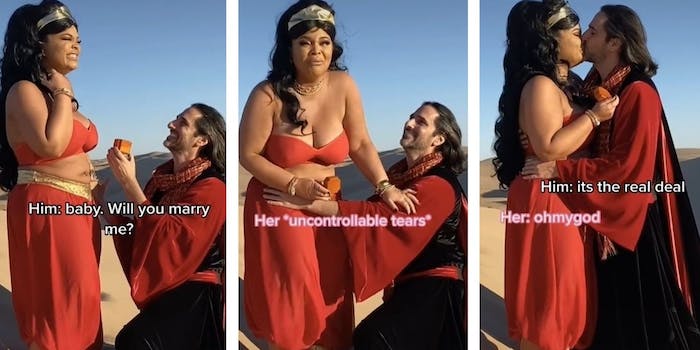 Paytas is engaged to the brother-in-law of popular YouTuber Ethan Klein.

Controversial internet personality Trisha Paytas announced on Friday that she is now engaged.

In an Instagram post and in a separate TikTok video on Christmas, Paytas announced that Israeli artist Moses Hacmon asked her to marry him.

She also posted the video of the moment she got engaged on TikTok.

As reported by Insider, Hacmon is the brother-in-law of popular YouTuber Ethan Klein of H3H3 Productions. Paytas, who is a frequent guest on Klein’s podcast, initially met Hacmon after H3H3 paired them together as part of a dating show on the channel.

Both Klein and his wife Hila, the sister of Hacmon, have expressed confusion over the relationship in the past.

“This is so fucking bizarre,” Klein said on his podcast last April. “That my brother-in-law, Hila’s brother, is now in a Trisha Paytas video doing Mukbangs and I didn’t even know. I don’t even know that they’re hanging out.”

Paytas and Klein currently run a show together known as “Frenemies.” It does not appear that Klein has publicly commented on the engagement thus far, but Hila offered her congratulations on social media.

Paytas, who also runs a popular account on TikTok, has found herself embroiled in countless scandals in the past.

In late 2019, Paytas faced backlash after claiming to be a transgender man. Viewers believed Paytas had only made the claim as a way to generate views online.

Paytas was also a top trend on Twitter earlier this month after finding herself at the center of an internet death hoax.

While there’s no evidence that the current engagement is fake, Paytas pretended last year to get married to a non-existent man in Las Vegas.