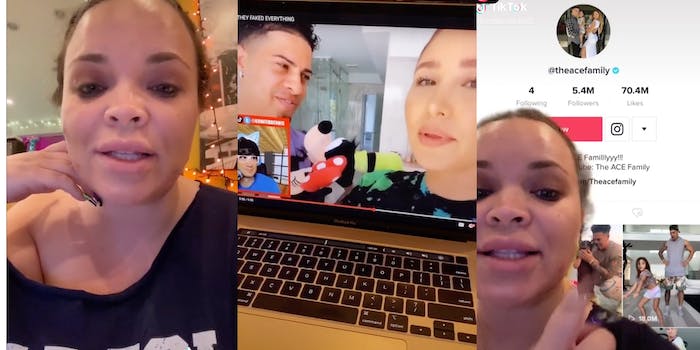 The famous YouTube family has been the subject of several recent controversies.

YouTuber Trisha Paytas is calling out Austin McBroom of the ACE Family in a series of TikTok videos after the family’s most recent controversy.

Paytas apparently took note of the concern viewers had on behalf of Catherine Paiz, Austin’s wife, after a recent video showed him yelling at her on camera. The ACE Family has spent the past week doing damage control, insisting that their relationship is fine and that the incident—which was accidentally included in a now-deleted YouTube video—was isolated and not a big deal.

Watching a 21-minute video, titled “We Went To Therapy,” in which Catherine and Austin both chastise viewers for expressing concern, Paytas calls out the “red flags” she sees in their interactions.

“The fact that he would even mock Catherine… or that people were concerned for her safety is insane,” Paytas says. “The fact that he’s laughing about it is sociopathic.”

Paytas, who is no stranger to controversy herself, took particular issue with the point in the ACE Family video when Catherine is “making it seem like [Austin is] the victim.”

“Basically you guys want Austin to be the villain at all times,” Catherine says in the clip, as Austin laughs along.

While Catherine and Austin insinuate that villainizing Austin is something the audience essentially does out of nothing, Paytas effortlessly rattles off a list of things he has been criticized for beyond yelling and cursing at his wife.

In particular, viewers had recently expressed concern over a TikTok video in which the couple’s 4-year-old daughter twerked. The video was a “joke” and supposedly against the idea of a 4-year-old twerking, and yet, as Paytas points out, the thumbnail of the video is actually of the child mid-twerk.

“I get that that whole clip is ‘Oh my God, she’s twerking. I’m the dad, I’m going to chase her off camera,’ but the fact that this is the thumbnail is literally catering to these freaking p-words here on TikTok,” she says, referring to pedophiles. “If you wanted to do that joke, stop her before she actually starts twerking. It’s disgusting.”

She continues: “The fact that they think Austin is being villainized for just anything is insane, and they’re completely just so far out of the real world, and it’s gross, and that video should be taken down, and that’s what people have concern with.”

Viewers agreed with Paytas’s take on the situation, reiterating their concern for members of the ACE Family while also expressing shock at how on point she was.

“You know it’s bad when TRISHA has to put you in your place,” one TikToker said.

“Trish may get cancelled every week but at least she knows when to cancel others,” another added.

The YouTuber also took aim at the similarly controversial James Charles in the videos, and as one can imagine, that has already turned into its own multi-part drama-fest.

Neither Austin nor Catherine appear to have responded to Paytas’s videos yet, but the twerking video has subsequently been removed from their TikTok page.