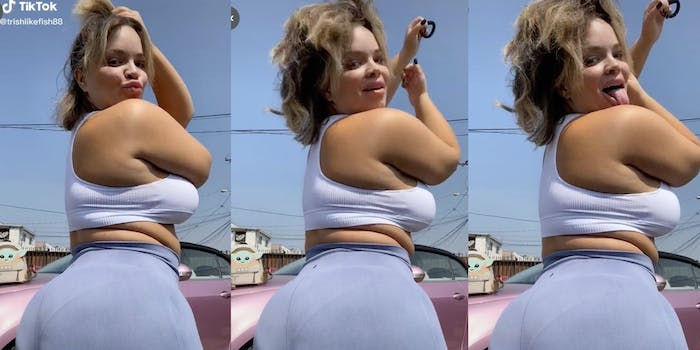 She was previously accused of exposing herself while recording a one-woman ‘Beetlejuice’ recreation.

In a since-deleted video, 32-year-old Trisha Paytas seemingly accidentally flashed viewers while dancing in her underwear on TikTok—again.

According to HITC, Paytas started uploading back-to-back videos of herself on Sept. 24 wearing different sets of underwear. In one of the videos, she reportedly wore bright blue, satin lingerie and began dancing.

Viewers flocked to Twitter—and her comments—to let her know they saw a lot more than her dance moves.

“So um I heard Trisha Paytas flashed her privates on TikTok? is this true or is it a rumor,” one user wrote.

While Paytas apparently didn’t notice the wardrobe malfunction before posting the video online, TikTok reportedly deleted the post. The app’s community guidelines state that any video depicting nudity will be removed as it violates their terms and conditions.

Paytas has yet to respond to the accusations, but this isn’t the first time she has had a video removed due to nudity.

Earlier in 2020, she was accused of accidentally exposing herself while recording a one-woman fan recreation of the Beetlejuice musical. At the time, she vehemently denied purposefully flashing the camera.