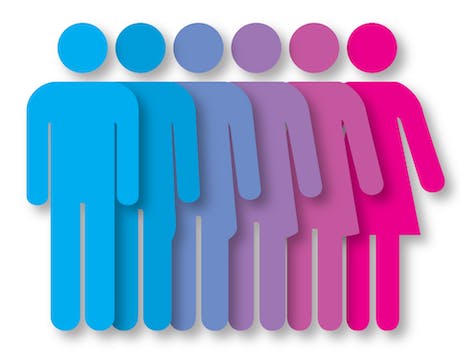 Under the guise of anonymity, teens are using Tumblr’s 30 Day Trans Challenge to share their personal stories of struggle and despair.

Most people don’t think twice about when they’ll get to use the bathroom next. But “Xander,” a 16-year-old transgender student in Canada, likens his fear of using the restroom in a public place to that of an earthquake.

“One word has never caused so much dread in such a short amount of time before [as restroom],” he wrote on Tumblr. “Hell, in school I’m currently not allowed in either gender bathroom. Since we’re on a highway I have to literally walk near a high traffic density to the nearby gas station or Harvey’s if I need to use the bathroom. I’ve taken to just not going to the bathroom at school.”

Xander is one of many teens participating in Tumblr’s 30 Day Trans Challenge, a month-long confessional of sorts where users share something different about themselves each day. Under the veil of Tumblr anonymity, Xander’s pseudonym allows him to feel comfortable sharing the most intimate stories of his life as a female-to-male transsexual.

Prompts vary from participants’ everyday experiences to their thoughts on the way laws and religions affect transgender people. Sharing his personal accounts and reading other participants’’ answers to the prompt has helped Xander make some of his first transgender friends.

“Honestly, not to sound depressed or pathetic, I don’t think I’d be here without it,” Xander, who requested not to use his real name, told the Daily Dot via Skype. “[Tumblr] helped me connect with other people like me and I would lack a serious support system without it.”

The National Center for Transgender Equality estimates that there are millions of people in the world just like Xander—people who identify with a gender other than the one they were physically born with.

Tumblr users have been participating in similar challenges since early 2010. This particular one seems to be striking a chord in the community—giving Tumblr’s transgender community a place to speak frankly about personal matters that rarely get discussed elsewhere. (Tumblr Storyboard Editor-in-Chief Chris Mohney declined to comment on this trend.)

“It’s hard to pass as a guy when you were born a girl,” Xander told the Daily Dot.

“That’s half the reason I like Tumblr. You say you’re a guy and—ding—they believe you. There’s no reason to question. There’s also no reason to hide.”

That’s not to say Xander doesn’t take precautions. He writes his Tumblr blog, Transgender Troubles, using one of the six pseudonyms he uses online.

Flea, another pseudonymous user taking the challenge at his Tumblr, Mexican Jumping Flea, said he thinks the challenge is becoming popular right now due to a domino effect from transgender bloggers. Both Xander and Flea have used the tag to connect with other trans people. Xander has met “two or three;” Flea has met a handful. It’s still more trans people than either of them knew before.

And Flea told the Daily Dot that Tumblr is a better platform for the 30 Day Trans Challenge than any other social network because he feels safest there.

“Before I came to Tumblr I felt empty and incomplete,” he wrote. “When I found out about other trans people (through Tumblr) I finally felt whole. I felt like there were people I could talk to, people I could relate to. Tumblr is sort of my safe space.”