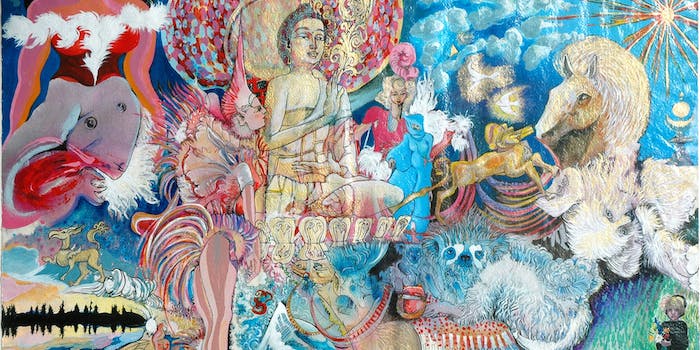 "I’ll never forget the first time he hit me."

I’ve never publicly talked about the abuse I suffered in my first relationship.

I’m not a caricature, I’m not a morality tale, I’m not a two-minute backstory at the opening of a crime show. I was a little girl from Richmond, VA, who fell in love with her first boyfriend.

I’m going to call him Jack.

I had just turned 17 when I met Jack. He was 20 and I thought he was beautiful. He was stick thin, with long pearl blond hair, and big, clear blue eyes. He could have transitioned to female very easily if he had wanted to. We used to meet in the parking lot behind my grandma’s house where we would talk and secretly hook up. He had been a violent child and was raised in institutions, away from his mother and family. This made my heart swell for him even more. This beautiful creature had been deprived of the most basic level of love. He needed me, and I loved being needed. He eventually became as mad for me as I was for him.

About a year after we met, we moved into a cute apartment in the hip part of Richmond called Carytown. Jack and I were as “in love” as either of us knew how to be.

I’ll never forget the first time he hit me.

Jack, some friends and I decided to go to this little hookah bar that played movies and served white pizza. The movie that night was Saw 2. After a couple hours of huffing sickeningly fruity smoke and watching a girl crawl around in a pit of syringes and plead for her life, we all packed in the car. Jack was driving, and I was in the passenger’s seat. He kept pushing for us to all go to the historic Hollywood Cemetery, but I kept shooting it down. It was midnight, so we would have to sneak in.

“The crypt keeper will think we’re grave robbers and call the cops!” I pleaded, not wanting to go to a cemetery in the pitch black. Eventually we arrived at our friend’s house to drop everyone off. Jack parked, and turned around to our three friends crammed in the back seat, shoulder to shoulder.

“Are you guys sure you don’t want to sneak into the cemetery?” he asked again.

I blurted out, “It is such a stupid idea! You will get arrested!”

Without missing a beat, he cracked me across the face with his open hand. I sat there stunned. The backseat was stunned as well. They slowly slunk out of the car and went into the house. Jack theatrically sped out of the gravel driveway, driving like Cruella De Vil, barreling down the road in hysterics with my hands clenched to the passenger’s seat, bracing for disaster. This sort of tantrum would become routine over the next few years. To this day I cannot argue with my current husband when we are in a car.

I didn’t even realize I was becoming an “abused woman,” in part because I had too much self-loathing to consider myself a “real woman.”

My “friends” confirmed this with statements like, “Well, Bailey is a boy technically…”

Others simply didn’t know what to do about the situation. The only support I got was from one female friend. She had overheard him attacking me in the kitchen while she pretended to sleep on the couch, her phone clenched in her hand. I begged her not to call the police. I was in denial. It didn’t look like the Lifetime movies I had seen.

My grandmother had been beaten by men. My father beat my mother. I had friends who were beaten by their dads. I had this image in my head of what an abusive man looked and acted like and it wasn’t Jack. When Jack would have these violent fits, it was never in that “typical male” way. He was hysterical, more like an overgrown child.

These tantrums quickly became frequent. I was slapped, grabbed, bitten, scratched, shoved, or intimidated. I found myself always trying to keep from setting him off, which in itself was nerve-wracking and another kind of perpetual abuse.

I internalized this so deeply that to this day I find myself wracked with fear when having uncomfortable conversations with my husband, who has never been anything but loving and supportive.

Looking back, all of the violent tantrums seem to blur together. It became my normal so gradually. After a couple months I didn’t even notice the huge hole in my wall where he had rammed his head. There’s a popular picture of me on the Internet, tired on a bed and looking into the camera, where you can see evidence of his violence. I had locked myself in my bedroom for safety and he went ballistic, destroying the door. Every time I see the picture, I am reminded of that sound. This scrawny boy was the scariest person I ever knew. What he lacked in muscle, he made up for with blind rage.

Why did I keep going back? He made me believe that he hated that violent person as much as I did. Perhaps that was true. I felt that Jack was just as much a victim as I was. He was more my “troubled child” than my “abusive boyfriend.” I couldn’t abandon him the way he had been abandoned as a child. That line of thinking resulted in my being mentally, emotionally and physically abused for three years. That is all it accomplished. I didn’t help anyone until I helped myself by leaving.

The last time Jack hurt me was around the time I left my hometown for good.

I knew the only way I wouldn’t get sucked back in was if I started over somewhere else. One night we were in an argument while driving around my neighborhood. I knew something bad was brewing. He used to say it felt like his head was filling up with oil when he turned violent.

He jerked the car abruptly into a shopping center and slammed to a stop, hitting the cement block at the front of the spot while he simultaneously flung himself out of the car and began heading to my side. I was shaking, trying to lock the door before he could make it to me. It really was like a horror movie. He pulled my door open before I could protect myself and then yanked me out of the car. We were outside of a Chinese restaurant that we had happily eaten at together just days before. I wiggled away from him and ran toward the entrance of the restaurant, hoping to get to someone before he could grab me. My fingertips just touched the door handle, but before I knew it I went down on the pavement like a bag of groceries, with him on top of me.

I can still remember how surreal it was trying to scream for help as I fell and seeing everyone inside enjoying their dinner, completely oblivious to the hell I was in. He turned me on my back, pinned me to the ground and began to scream in my face. He wasn’t screaming words. It was animalistic. He was a person completely out of control. He put his mouth over my nose and began to bite down as he continued to scream.

The rest is a bit unclear in my memory, but at some point he snapped out of it. I remember walking home with him a few yards behind me and telling him that if he followed me I was going to have him arrested. He stood in the distance, looking repentant and sad.

One of the reasons I’m choosing to speak out now is the recent attack on my fellow adult entertainer, Christy Mack. Her story compelled me to tell my own. In some way, the love that poured out for her made up for the lack of compassion I was shown by my peers at the time. At the same time, after seeing some of the more ignorant and hateful comments directed at Christy, some by women no less, I felt the need to state that which shouldn’t need to be stated: Domestic violence is never justifiable.