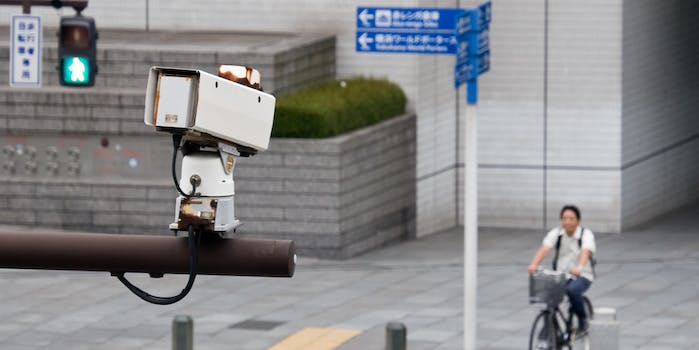 Is the surveillance age making us any safer?

WYNC looked at the numbers behind red light cameras, and the results may surprise you.

Many unfortunate American motorists are familiar with the sight of red and blue lights in the rearview mirror, followed by a traffic citation. In some states, speed and red light cameras are supplementing the work of police officers, radically increasing the number of citations issued annually with a click of the shutter. Opponents say it’s all about raising revenues. Supporters argue traffic cameras increase safety on the roads. What’s the real story behind this addition to American security and surveillance culture? Do traffic cameras actually make the roads safer and are they worth the cost of personal freedoms?

They’re tough questions to answer, but investigators at WNYC had a go at the safety issue, looking at speed cameras positioned on key New York City streets. Their conclusions weighed in mostly on the side of safety. “In areas where we located installed cameras,” they report, “there were 13 percent fewer collisions from September through December last year, compared to the same period in 2013.”

If the goal of speed cameras and their related red light cousins is to reduce not just traffic accidents but pedestrian and cyclist fatalities, their evidence would suggest that at least in New York, traffic cameras are serving a purpose. Notably, the WNYC team also learned that tickets issued at the cameras they identified fell over time as people learned to be wary of the camera, showing that members of the public started to slow down in the areas targeted by speed cameras, which is precisely the stated goal.

But does this extend to the rest of the United States, and even if it does, does it justify the invasive nature of traffic cameras?

Twelve states explicitly prohibit speed and/or red light cameras, or bar them with extremely narrow exceptions. Out of that, 10 ban both types—and five are among the top 10 states in terms of traffic fatalities. Drivers in South Carolina, Montana, Mississippi, Arkansas, and Nevada rarely have to smile for the camera, and their fatality rates may reflect that.

Those are rather damning numbers. Driving in a state without traffic cameras is correlated with an increased risk of death in traffic accidents. But correlation doesn’t imply causation, and that’s true here as elsewhere. If traffic cameras could stop traffic deaths across the U.S., there would be a strong argument for instant nationwide implementation. However, there are more ways than one to die in a car.

The statistics on fatalities and traffic cameras account for only part of the picture. Traffic accidents aren’t just about whether people know they’re on camera but about a state’s traffic laws, enforcement, and setting. Oregon, for example, is notorious for its low speed limits and hyperactive police officers, and it comes in at no. 33 on state rankings.

Why isn’t it lower? Quite likely because the state has snow and rough weather, which tend to increase the risk of traffic accidents. Nearly half of the state’s traffic deaths take place in small cars, which can be difficult to handle in poor weather. Fatalities may be radically reduced by Oregon’s aggressive laws and police, but its traffic cameras—permitted with some limitations—might not help in a state where 65 percent of deaths occur on rural roads, which would be tough to cover and enforce with cameras.

For a particularly stark example of the rural road problem, take a look at Montana, with the highest risk of death by car in the United States. Ninety-eight percent of its traffic fatalities occur on rural roads, and similarly rural states also have high rates of deaths on isolated country roads and byways. It might seem surprising to see so many traffic incidents in such settings, given the low overall traffic, but many rural states also have a high rate of single vehicle collisions, like crashing into trees, running off the road, and hitting other structures.

Can Montana’s high accident rate be attributed to its ban on traffic cameras or its rural roads? Traffic cameras are unlikely to be deployed on rural roads due to low payoff; in order to determine if they’d make roads safer, we’d need to actually install them, see if Montana drivers slowed down, and determine if the accident rate dropped. Are rural drivers made reckless by knowing they’re unlikely to be caught by law enforcement or cameras or because they think low traffic makes it easy to get sloppy on the road? These are tough questions to answer when evaluating the role of traffic cameras in road safety, and they complicate discussions about the issue.

Oddly enough, Bill Chappell at NPR reports, traffic cameras can become too successful for their own good. The perception that they’re just designed to generate revenue isn’t entirely untrue, he says, with traffic engineers in some cities gaming lights, increasing fines, or removing signs warning motorists about upcoming signals to increase the number of violations—which increases the number of accidents, too. In 2005, the Federal Highway Administration found that red light cameras in particular tend to cause a slight increase in rear-end crashes, as motorists slam on the brakes to avoid a ticket, though they identified a significant decrease in side collisions, which are much more likely to result in fatalities.

Though it’s clear that multiple factors are involved in traffic safety, the safety argument when it comes to traffic cameras definitely holds water. If traffic cameras and automated enforcement do reduce crashes and fatalities in the bigger picture when deployed correctly, they might seem justifiable under a social contract that promotes overall safety and well-being.

For some individuals, though, they represent a restriction of privacy and freedoms. The National Motorists Association, for example, is opposed to traffic cameras, arguing that they make the roads less safe, with Emmarie Huetteman at the New York Times pointing to claims from critics that they violate privacy. If you can be photographed by traffic cameras, they can also track you and be used in criminal prosecution and other law enforcement activities.

For some drivers, this is an unacceptable breach of rights. Their claims don’t hold up under constitutional scrutiny, though, with the Supreme Court ruling that drivers don’t have a reasonable expectation of privacy, given that they’re in public.

Opposition to traffic cameras and other traffic calming measures overlooks a fundamental issue in American car culture: The attitude that driving is a right, when it should be more accurately classified as a privilege. America is somewhat unique in the West in terms of the sheer number of cars on the road, the expectation that everyone be permitted to drive, and the belief that people should only lose their licenses under dire circumstances—like multiple DUI offenses or severe impairments that interfere with the ability to safely operate a vehicle.

But that’s not how cars and car ownership should work. Americans deserve privacy, which is why the advent of CCTV and other widespread surveillance measures is so troubling, but the rules change on the open road. Driving is a choice, not a requirement; it’s a civil rights violation to tap someone’s phone but not to photograph her car as she whizzes by at 20 miles over the limit. We require people engaging in a dangerous activity that can potentially injure other people to exercise reasonable precautions, and it’s reasonable to enforce those precautions by means like automated ticketing, which provides coverage when officers aren’t available and reduces the risk of death on the job.

Even if traffic cameras only save a handful of lives every year, they’re worth it. It’s hard to tell how many lives might be saved until we roll them out in more regions across the country, but evidence strongly suggests that their use increases survival on the road. Objections to their use, meanwhile, reflect the entitled nature with which Americans view their cars.