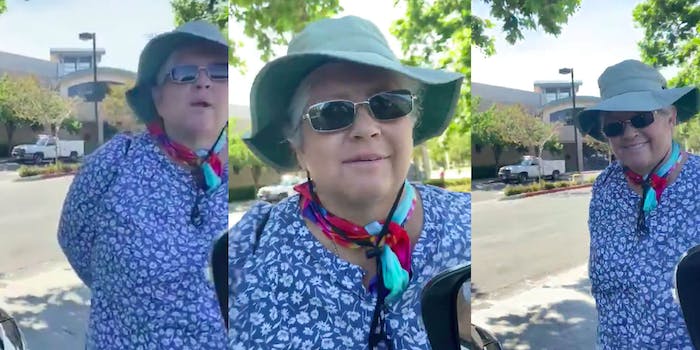 She was caught on video both times.

Another racist video of the same “Karen” who verbally assaulted a woman for working out on stairs at a park in Torrance, California has gone viral on Twitter.

The woman, who has been reportedly identified as Lena Hernandez, was filmed Wednesday morning telling a woman to “go back to whatever…Asian country” she belongs to. Later that same day, Hernandez was caught on video yelling racist obscenities at a man, who also caught the whole altercation on video.

Brendon McNerney posted the video for his friend on Thursday.

People swarmed his video to point out that it was the same woman from the earlier viral video at the park.

He then tweeted, “ITS THE SAME F*CKING LADY,” with a link to the video of Hernandez’s racist tirade earlier that day.

In the most recent video, which has over 11 million views on Twitter, Hernandez can be heard threatening the man recording.

“You know how many people can’t stand you being here? We don’t play games…I play games where you get f*cked to death.”

The man was in the car with his 11-year-old son who could hear everything. He told local news sources that he wished to stay anonymous and that he identifies as Asian-American.

“Yesterday was one of those days just like every day—I parked my car in the shade and walk my kids,” he told NBC LA. “Nobody should hear those kinds of words, especially my son.”

Internet sleuths were quick to find the details on Hernandez.

Twitter user @Nanderrrs posted a photo with a background on Hernandez, including her address, birthday, and occupation. The flyer of information the Twitter user posted reads, “She is a known racist who is Hispanic but hides her ethnicity and insists she is white.” (However, it’s worth noting that details in the flyer have already been disproven, such as her place of employment. Other information in the flyer was not able to be independently verified by the Daily Dot.)

A Twitter user named Andy Galpin claims to be close with her family and apologized for the woman’s actions.

“1. I’m extremely sorry to the people she’s abused; awful and sickening. 2. She is MASSIVELY mentally ill. Been devastating her fam for years & she’s off her meds & needs severe help,” he wrote. “No excuse, just thought victims might want to know.”

Torrance’s mayor told NBC LA that the local authorities are investigating to determine if a crime was committed.