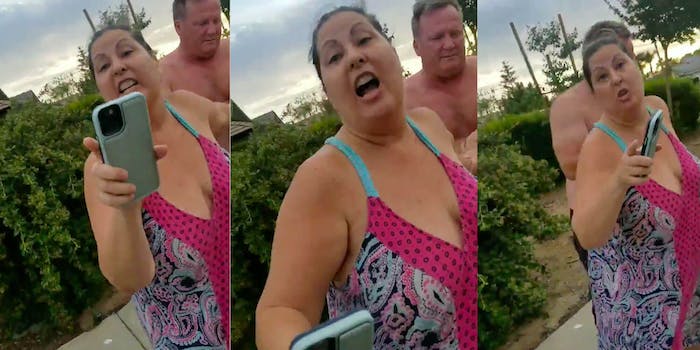 ‘I’ll f*cking kill you,’ the woman says as her husband drags her away.

A new TikTok video has emerged of a “Karen” verbally attacking a Black Lives Matter child protester in Bakersfield, California.

The video, which has been seen by over 2 million people on Twitter and 5 million people on TikTok, was captured by the young protester’s mother, Erika Baze. Baze was walking home with her daughter after attending a march when she was approached by the woman seen in the video, later identified as Carrie Maxwell, according to KGET 17.

The video begins with Maxwell yelling at and filming Baze’s child, to which Baze yells at her not to do. The man in the video, assumed to be Maxwell’s husband, begins to pull Maxwell away from the incident. As he’s pulling her away, she says, “I’ll f*cking kill you!”

Baze yells as her daughter stands by her side crying. Trying to console her daughter, Baze tells her that “(Maxwell is) not calling anyone” after Maxwell threatens to call the police, but her daughter continues to cry and say that she’s scared.

Maxwell later issued an apology through her attorney on Monday claiming to have been acting out of “anxiety, frustration and panic.” She said she has been watching the protests turn violent and was worried when she heard the demonstration near her home, according to KGET 17.

In the statement, she said, “There was a woman who became confrontational and I responded in an inappropriate manner. I never intended to cause fear. I never spoke to or threatened this woman’s daughter. I have never been in a physical altercation in my life.”

She apologized for her behavior and said she was “humiliated” by her actions.

After the video was posted on Twitter, people found out where Maxwell works and began doxing her. One person commented that making a death threat is a felony. In response, the Twitter user who uploaded the video, who is alleging to be the child protester’s mom, said they have filed charges with the district attorney and are waiting to see if they get picked up.