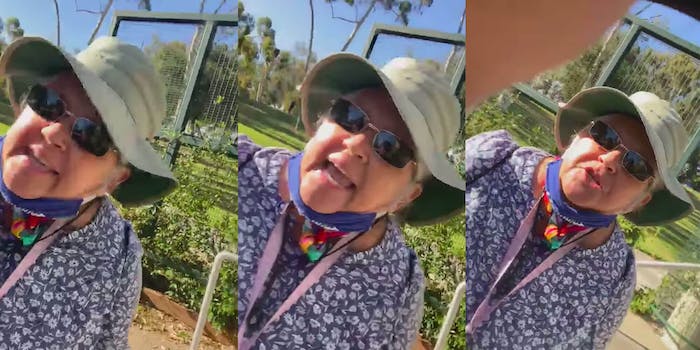 'Go back to whatever f*cking Asian country you belong in.'

Yet another video of a racist “Karen” is going viral.

This triggered the woman to unleash a verbal onslaught of racist rhetoric. “The next time you talk to me like that, you’re gonna get your ass kicked by my family,” the older woman yelled. “They’re gonna f*ck you up!”

Bulseco calmly asked the woman what she did wrong, and the older woman replied, “Because you’re an asshole, you get the whole stairs to yourself?” Bulseco then points to the other open stairs the woman could have used. But, the woman began to yell at Bulseco, with her mask under her chin, suggesting that she go to a gym in the middle of a pandemic.

“This is not your place; this is not your home,” the woman continued. “We do not want you here. I hope you put that on Facebook because every f*king person will beat the crap out of you. Don’t you ever say ‘Oh Jesus’ to me again when I want to use the stairs, you f*cking b*tch. You’re a sick f*cking teenager.”

“Oh, thank you,” Bulseco responded. The older woman then questioned her outfit, asking her why she would wear all black in the California sun.

The video was shared to Facebook by Bulseco’s friend, Samantha Baker, who explained the situation and wrote, “luckily Sherry films all her workouts so everything is recorded… Well she asked to be posted on Facebook so let’s make this lady famous.”

The older woman has yet to be identified.