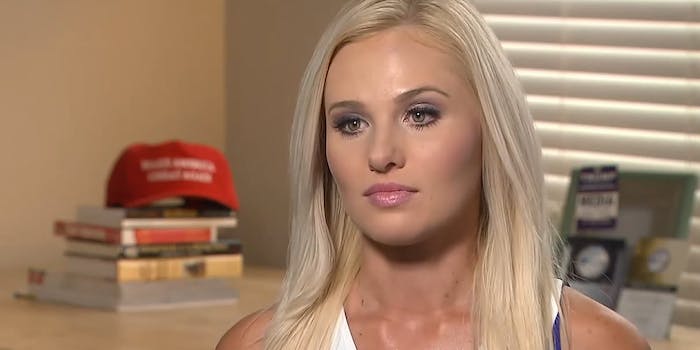 Tomi Lahren lectures millennials on holding jobs, despite getting fired

She maybe could have seen this coming.

If you know any single thing about conservative pundit Tomi Lahren, you know that she would not like Notre Dame students walking out on Vice President Mike Pence‘s commencement address.

It strikes nearly every box that lights a fire under Lahren: entitled millennials, disrespect for government officials, refusal to accept the Trump administration.

So, of course, she responded to a video of it on Twitter.

Snowflakes think this kind of crap will fly in the real world? Good luck holding a job, kids! https://t.co/O19otIrW77

The… uh… LOL there is that she’s a 24-year-old millennial, who is often triggered enough by incidents to record videos of herself ranting about them to the world. And she’s unemployed (well, was, see at the bottom).

How did you do holding onto your job?

Yes, you know better than anyone that you can lose a job at any time

Seems like youre the snowflake. Can't handle a peaceful protest tht DOESNT follow your narrative Freedom of speech goes both ways, hypocrite

You literally are unemployed.

Lahren’s takes are heated, but readers were jazzed to throw them right back at her, and many did.

That said, as of press time, it appears Lahren is no longer unemployed.

According to the Daily Beast, she was hired by the pro-Trump PAC Great America Alliance.