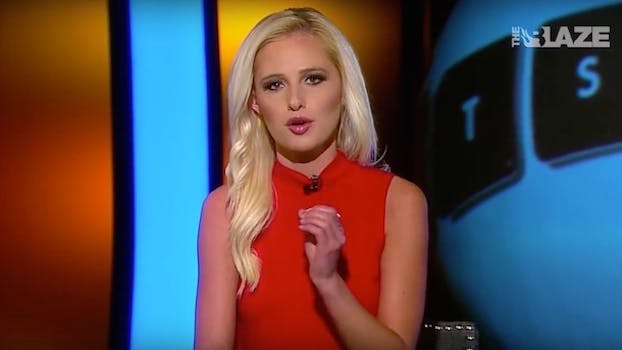 Tomi Lahren gets attacked by her own logic, becomes a meme

Twitter trounces Lahren with memes excoriating her for her arguments.

It is hard to believe that only two years ago, we had no jobs, no cash, no hope, and no Tomi Lahren.

And while you can argue the existence of the three former items in 2017, there’s no denying Lahren is here to stay.

The conservative firebrand is either the only person to really tell it like it is or the most obnoxious bloviator in modern American media. It all depends on your perspective.

Lahren kept a relatively low profile for a while at the Blaze, shouting into the online void, until she exploded onto everyone’s Facebook feed with her hyper-viral Colin Kaepernick rant.

Ever since then, she has become an inextricable part of our national discussion, delivering her takes with a fiery certitude that has become her calling card.

That angry confidence she delivers every message with has also given Twitter a blueprint for mocking her.

Oh you heard new Migos is coming? Well guess what else is coming. A whole bunch of A-Migos coming to our country ILLEGALLY pic.twitter.com/di1zRCfM7C

Oh your pussy bomb? You know who gets bombed? Our soldiers fighting for our freedom pic.twitter.com/w2arde1yml

“Black Beatles? The original Beatles were white. If this was the other way around liberals would cry cultural appropriation. Be consistent.” pic.twitter.com/zFz9itFgiG

Macy’s Thanksgiving Day Parade??? You know what we should be giving thanks and parading for??? THE TROOPS THAT SERVE OUR COUNTRY EVERYDAY pic.twitter.com/Ju54WlQVxK

“You think the moon was big last night? You know what’s ACTUALLY big? The sacrifice our troops make every single day for this great nation” pic.twitter.com/rPsNXPWrcq

“How can white people be racist when ABRAHAM LINCOLN FREED THE SLAVES AND HE WAS A WHITE MAN. IF ANYTHING YOU SHOUKD BE THANKING US” pic.twitter.com/HlqPkUcL8c

“You think the moon was big last night? You know what’s ACTUALLY big? The sacrifice our troops make every single day for this great nation” pic.twitter.com/rPsNXPWrcq

“And why isn’t there a white Friday? This is a classic example that whites are discriminated against in our society!” pic.twitter.com/ERcqjktXAa

Starbucks is using green cups Green? The color of the Grinch who stole Christmas? Do you need any more proof that they hate Christian values pic.twitter.com/PdDdo92rXw

Listen up America; its New Year’s Eve NOT New Years Steve! Eve was in the Bible and White Jesus created this holiday to honor the military! pic.twitter.com/stlzBkZ2vZ

“You think that dick was big? You know what’s ACTUALLY big? The sacrifice our troops make every single day for this great nation” pic.twitter.com/Px8ROg6NQT

Tomi Lahren: I don’t see color
*sees a black pen*
Tomi: A BLACK pen? Why not a white pen?? But I guess BLM liberals would find that RACIST pic.twitter.com/Rtdrzzd6L3

If you thought the election of Donald Trump, whom Lahren vociferously argued for, would calm her down, you don’t know Tomi.

Look at her heated attack on Meryl Streep in the aftermath of the actress’ Golden Globes speech, who said absolutely nothing to Lahren.

Meryl bout to get some “final thoughts” tomorrow. These entitled Hollywood crybabies still don’t understand how out of touch they are!

It might be warm in LA, but make no mistake it’s raining snowflakes. Out of touch, whiny, overpaid SNOWFLAKES! #GoldenGlobes

These Hollywood elites wouldn’t know average, every day hard-working Americans if we bit them in the ass. #GoldenGlobes

Oh no!! What will @realDonaldTrump do without the support of the liberal Hollywood elite?! Oh I know, he will Make America Great Again.

Oh and Meryl, we are just fine with watching football. Thanks. #GoldenGlobes

You’re right about 1 thing Meryl, violence does incite violence kinda like the violence the DNC paid for at Trump rallies. Kinda like that..

Safeguard the truth Meryl? Like the truth in those 33k deleted emails? Or are we talking about Hillary’s lies? Not sure, Meryl….

All that after one speech at a relatively minor Hollywood awards showcase that didn’t address her in any way whatsoever.

Yes, there just may be some truth to these Lahren memes.