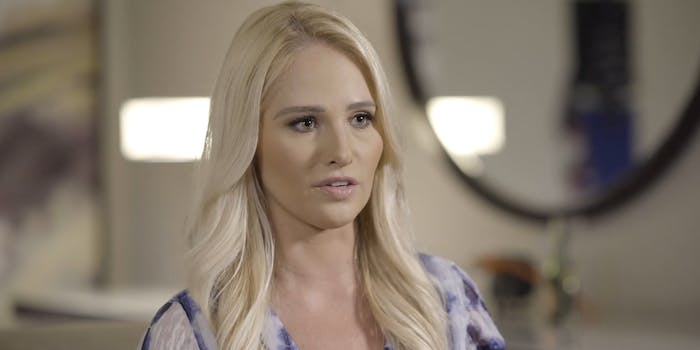 Tomi Lahren has launched a new clothing line, and people online have wasted no time in poking fun at it.

Lahren partnered with Alexo Athletica to launch a “Freedom” line. The collection has an array of all kinds of star-spangled clothing including leggings, sports bras, tank tops, T-shirts, jackets, and sweaters.

In an Instagram post announcing the partnership with Alexo Athletica, Lahren said she has been told she’s too “controversial to have an athleisure line.”

Some have told me I’m too “controversial” to have an athleisure line, that conservatives should just stick to politics and Trump cheerleading. My response? Watch me. Introducing Freedom by Tomi Lahren by @alexoathletica full line available now. #TeamTomi #FreedombyTomiLahren #Alexo #athleisure

Meanwhile, in a video on the company’s website, Lahren said the collection would allow its wearers to “feel proud of freedom.”

She added: “I think there are a lot of young girls out there that don’t really feel like they have a brand that represents their freedom. They don’t feel they have a brand out there that represents their rights. It’s kind of been taken over by a certain group of people and I wanted my fans, my followers, my friends, to have a line that they could wear and feel proud to be an American, feel proud of freedom, proud of the country they live in. And that’s really what this line represents, besides being a fun, sporty line.”

Alexo Athletica, the line producing it, became famous for its concealed-carry athleisure. It says that doesn’t “shy away from promoting one’s second amendment right and certainly have never built in the ability to do so.”

Lahren’s line does not have gun holsters, because, as she says: “I believe that there are a lot of young people out there that really aren’t ready to have a gun holster in their pants, but they like the idea behind it. They like the messaging behind it, they believe in the second amendment, and they want to wear something from a company and person like me that really do represent that.”

While Lahren was promoting the new collection, the new line of clothing was quickly joked about.

Finally I can relate to tomi lahren, as I am similarly too controversial to have an athleisure line. https://t.co/5q2TE8cbqH

Ugh people tell me this all the time @TomiLahren ! https://t.co/cYDIMsE6TQ

Others had more serious questions, like where the clothes are being manufactured.

.@TomiLahren where are you manufacturing this athleisure line? https://t.co/vcvyI5tVTM