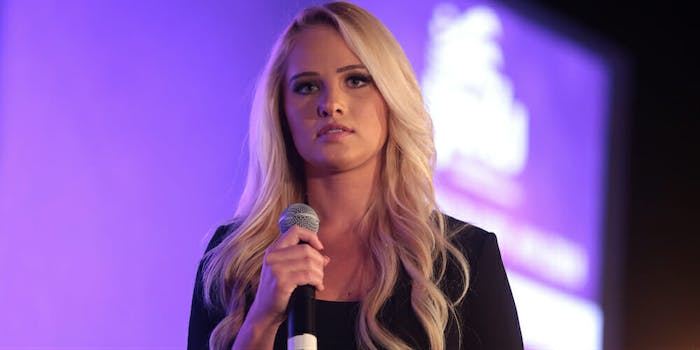 Tomi Lahren is stoked about the ‘straight pride’ parade

A group of heterosexual men are trying to organize a “straight pride” parade to celebrate their straightness during Pride Month. None other than far-right personality Tomi Lahren is stoked about the groundbreaking concept.

“Why is it so taboo nowadays to recognize or be proud of heterosexuality?” Lahren asks on the streaming service Fox Nation.

Lahren made sure to note she has “no issue with LGBT people being proud of who they are,” but still, she “could do without seeing men in speedos and buttless chaps parading through the streets.”

The parade is being organized by the far-right, white-nationalist led group Super Fun Happy America, which “advocates on behalf of the straight community.” The groundbreaking concept was met with jokes and confusion when the organizers announced what they were planning.

It seems Lahren agrees with that sentiment because she claims straight, white men are the real victims here.

“Don’t forget, it is open season on straight white men in this country and y’all aren’t allowed to celebrate your straightness,” Lahren exclaimed.

Twitter users quickly shut Lahren down–almost as quickly as they shut down the straight pride parade.

“Had no idea I was being persecuted. Opening GoFundMe account tonight. Thanks Tomi,” one straight, white male quipped in response to seeing the video.

⁦@TomiLahren⁩ Oh tami you are so wrong. Again. As usual. Straight white men are the group that is the most protected and haven’t had to fight for basic rights. Housing, voting etc. etc. Your comments one again prove your ignorance. Educate yourself. https://t.co/ds5UdqGNZH

Had no idea I was being persecuted. Opening GoFundMe account tonight. Thanks Tomi!

Another Twitter user pointed out that the group’s vice president, Mark Sahady, is an active member of the far-right group, Resist Marxism.

“Isn’t it funny how the so-called loving and tolerant leftists and members of the LGBT community demand respect for their events and celebrations, but are so quick to diminish, demonize, and mock groups they disagree with?” Lahren asked.

Because of course @TomiLahren – who has a history of using racist language and arguments – is supporting #StraightPride, organized by a guy who has ties to neo-Nazis, white supremacy and the Charlottesville event.https://t.co/cow78ta3rU

Both Amazon and Etsy sell buttless chaps that you can purchase just in time for Pride festivities.