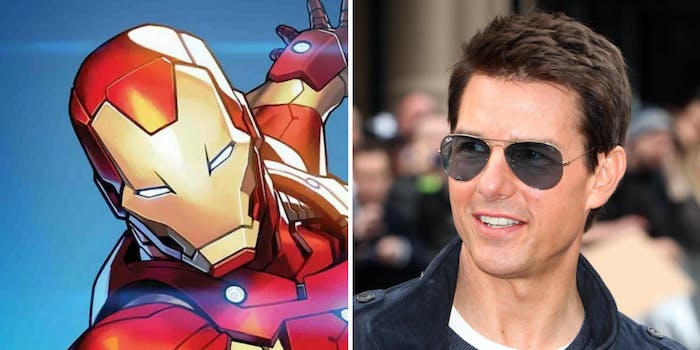 There's a viral fan theory that Tom Cruise will play Superior Iron Man in 'Doctor Strange in the Multiverse of Madness.'

The trailer for Doctor Strange in the Multiverse of Madness dropped during the Super Bowl this weekend, prompting a flood of excitement and analysis from Marvel fans. Some responses were predictable (like the hype over America Chavez‘s MCU debut) while others were more offbeat. Namely, the viral fan theory that Tom Cruise has a secret cameo as the villainous Superior Iron Man.

A few years ago, this kind of theory could immediately be dismissed as nonsense. But in the context of Doctor Strange 2, it’s surprisingly plausible. Continuing on from WandaVision, Loki, and Spider-Man: No Way Home, the film will include characters from alternate universes, such as an evil Doctor Strange, and Patrick Stewart— probably as X-Men’s Charles Xavier.

A new Tony Stark could easily show up in this kind of story, and before Robert Downey Jr. was cast, Cruise was on the shortlist to play Iron Man. In the comics, “Superior Iron Man” is basically a supervillain version of Tony Stark, and Cruise would be an obvious choice to play him. But before we go any further, let’s take a look at what fans actually saw in the trailer:

This clip is pretty ambiguous. While it does show a flying character in glowing armor, a lot of people identified this person as Maria Rambeau’s Captain Marvel, not Iron Man. It’s hard to get a clear image from such a short, blurry scene, but this definitely looks like Captain Marvel actress Lashana Lynch.

So, can we dismiss the Tom Cruise Iron Man theory as pure wishful thinking? Actually, no. This idea predates the trailer, beginning with supposedly leaked images from behind the scenes. These totally unverified photos appear to show Cruise filming in a motion-capture suit with Benedict Cumberbatch. The idea is so popular that there are Tom Cruise/MCU deepfake videos with hundreds of thousands of views on YouTube.

Of course, these images could easily be fake. But after Marvel spent months denying that Tobey Maguire and Andrew Garfield were in Spider-Man: Far From Home despite leaked set photos, fans no longer know what to believe. Plus, the Doctor Strange 2 trailer includes other Iron Man-related imagery like Ultron robots:

The trailer seems to show Doctor Strange being arrested by Ultron drones and being put on trial in front of Professor Xavier, a type of story that echoes Marvel’s Illuminati comics. The Illuminati society includes Tony, Strange, Xavier, Reed Richards, and others, acting as a secret governing body for superhumans.

The most compelling argument against the Tom Cruise/Iron Man theory is Cruise himself. He likes to have a lot of creative control over his own projects and typically plays a lead role. That’s the total opposite of making a surprise appearance in the MCU, where he’d have to play second fiddle to Benedict Cumberbatch and Elizabeth Olsen. Marvel loves stunt-casting, but a supporting role as Superior Iron Man just doesn’t make sense for Tom Cruise’s image.