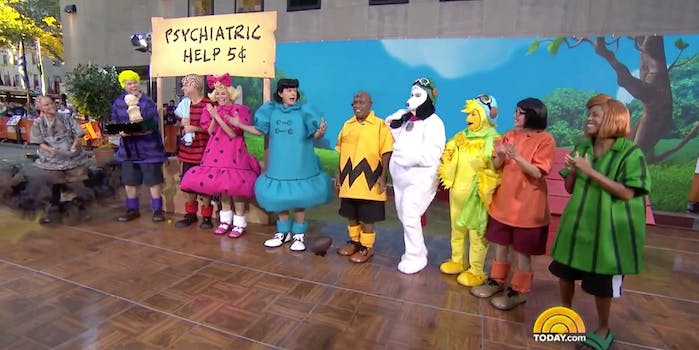 ‘The Today Show’ anchors’ ‘Peanuts’ costumes are the stuff of nightmares

The anchors of the Today Show continued their annual tradition of debuting their complementary Halloween costumes on Friday’s broadcast, and they’re filling their viewers with fright.

In honor of the upcoming Peanuts movie, the TV personalities dressed up as your favorite Peanuts characters, ranging from Charlie Brown and Snoopy to Lucy and Linus Van Pelt, Peppermint Patty, Schroeder, and even Woodstock. For most of us, dressing up as any of those characters might involve a wardrobe change (and maybe some face paint for Snoopy and Woodstock). But the Today Show loves to take up to another level with the prosthetics to boot, and the results are horrifying.

More pics of the TODAY gang and their Peanuts inspirations! #HalloweenTODAY pic.twitter.com/PjOpt3c29P

The Today Show provided a terrifying video of Matt Lauer, Savannah Guthrie, Al Roker, Kathie Lee Gifford, Hoda Kotb, and the rest of the gang coming out for their reveals. Even Regis Philbin stopped by as the Red Baron.

It’s hard to impress the Internet with anything anymore, but it’s also just as hard to terrify them. And Today’s unintentional attempt was a slam-dunk.

Peanuts, the depressing cartoon from your youth, is now an even more disturbing film/Today Show Halloween nightmare

I love the Today Show and always will — but this #TODAYHalloween Peanuts thing is making me wildly uncomfortable.

In particular, it was Carson Daly’s take on Linus—stringy hair and all—that may have unnerved people the most. Even the person who runs the Today Show’s Twitter account couldn’t resist making a jab at the expense of Daly.

If you told me this is what the Saw movies were about, I'd believe you. https://t.co/gY8YQBTysx

ScreenCrush is now updating its list of the best horror films of the last 25 years. New #1. pic.twitter.com/NLrFWPSJMv

And what may be even more frightening? The unforeseen consequences of trying to make an accurate cartoon costume.

“Kids could catch it as they wait for the bus to come,” Esquire’s Matt Miller wrote. “And 10 years from now, they’ll try to explain to their therapist where their inexplicable fear of the Peanuts characters began.”