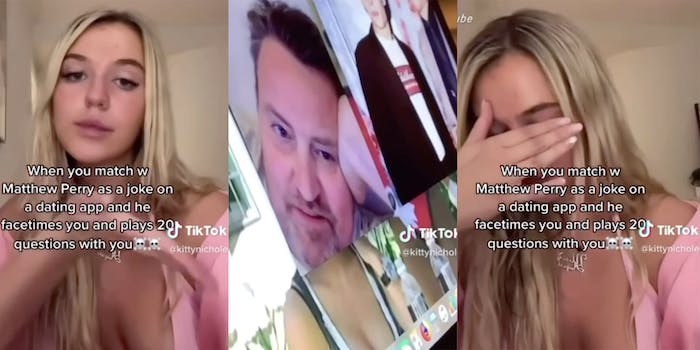 TikToker says she was booted from Raya after exposing Matthew Perry

She was 19 when they matched.

The 20-year-old TikToker who exposed Matthew Perry for matching with her on Raya—and subsequently flirting with her on FaceTime—was reportedly booted from the exclusive dating app.

TikToker Kate Haralson reportedly shared a since-deleted video to her TikTok account featuring her and Perry’s FaceTime call, during which they seemingly played “20 Questions.” “When you match with Matthew Perry as a joke on a dating app and he facetimes you and plays 20 questions with you,” the video’s text read.

Perry made headlines for his presence on the app shortly after another TikToker, Nivine Jay, similarly exposed Ben Affleck for sending her a video via Instagram after she unmatched with him, believing it wasn’t really him. While the FaceTime call between Perry and Haralson happened in May of 2020, Haralson posted the video of it nearly a year later, in the first week of May of 2021.

In a recent interview with Page Six, Haralson said she was inspired to post the video following Jay’s video and wanted to further highlight how many celebrity men take advantage of young women on dating apps, as she was only 19 when she and the 51-year-old matched. She admitted to the outlet that the FaceTime call made her feel uncomfortable.

Haralson later updated Page Six on Friday to tell the outlet that she was kicked off Raya. “I should have expected that would happen,” she said. “I feel fine about it. I never really used it anymore anyways.”

Raya is known for maintaining the privacy of its users, many of whom are public figures. “Every member is expected to follow our simple rules of respect, trust, and privacy,” its guidelines read.

In the Friday interview, Haralson also gave advice to those who are considering exposing their celeb Raya matches. “Unless you wanna get banned, don’t do what I did,” she said.

Both Affleck and Perry were accused by many online of acting creepily toward their once-matches, with Chrissy Teigen going so far as to call the men’s interactions “creepy” and “desperate” while also calling the TikTokers’ decision to expose them “tacky.”

Meanwhile, Jay and Haralson have since connected through social media, with Jay giving Haralson the advice of ignoring “all the hate comments” she is currently receiving from fans of the Friends star, according to Page Six.

The Daily Dot has reached out to Raya, Kate Haralson, and Matthew Perry’s team.