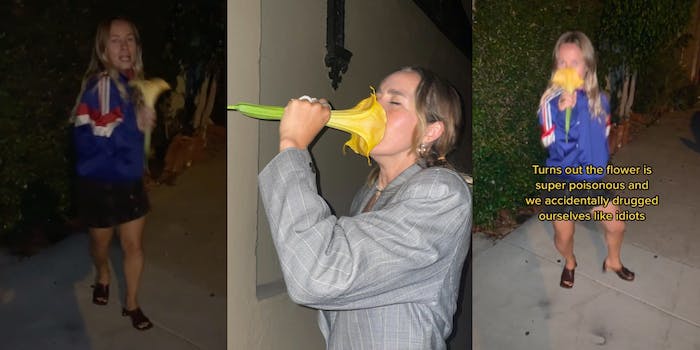 'Me and my BFF found this beautiful flower and spent the night deeply inhaling its smell.'

A musician on TikTok discovered the dangers lurking beneath even the most innocuous-seeming objects after she apparently poisoned herself with a highly toxic flower.

TikToker and artist Raffaela Weyman, who goes by @songsbyralph on the platform, was enjoying the evening with a friend when they stumbled upon a unique yellow flower. It seemed harmless enough, so she said the duo picked the flower and “spent the night deeply inhaling its smell.”

In a TikTok detailing the incident, Weyman can be seen pressing the flower over her face and inhaling deeply. She explains via text overlay that she and her friend then headed to another companion’s birthday. When they arrived, they inexplicably felt “so f*cked up” that they had to leave.

Once they were home, things escalated.

“When I got home and fell asleep, I had the craziest dreams and experienced sleep paralysis for the first time in my life,” the text overlay explains.

As it turns out, the flower in question was an Angel’s Trumpet, a toxic flower that can be fatal if ingested. The highly poisonous plant can cause “disturbing hallucinations, paralysis, tachycardia, and memory loss,” according to Britannica.

As Weyman notes in the final portion of her TikTok, “turns out the flower is super poisonous, and we accidentally drugged ourselves like idiots.”

Thankfully, both Weyman and her friend made it out to the other side without any lasting damage. Commenters were quick to recognize the flower and shared their own experiences with Angel’s Trumpet.

One commenter explained that their brother “tripped on one of these when he was a teen.” Apparently he was “never the same.”

Another user said their brother had a similar experience, except he “blacked out, broke into someone’s house, and woke up in the hospital.”

One user explained that the drug “scopolamine” is derived from Angel’s Trumpet. As a medication, it is prescribed to combat nausea due to motion sickness or pre-surgical meds.

When used recreationally—which is a truly terrible idea—it seems people typically boil the flower in water, which is then consumed. Some have also eaten the flower itself, but considering that every part of the flower, including the stem and leaves, is poisonous, it went poorly. One user said their acquaintance “ate one and bled out of multiple orifices, went into a coma, and was temporarily blinded when he woke up.”

Users claim the flower has an “amazing” smell, but it is better enjoyed from afar. Those lacking a green thumb simply found themselves disappointed to discover that even nature is trying to kill us. That’s very 2021 of it.

“So we can’t even stop to smell the flowers anymore,” one commenter wrote. “Is ANYTHING safe?”

Another user was blessedly saved from making a similar mistake. “I never knew this and was literally looking into getting one,” they explained.

While it can be used medicinally, scopolamine—also called burundanga or Devil’s Breath—is a frightening drug that, as noted by VICE News, can be compared to “the worst roofie you could ever imagine, times a million.”

“The deal with burundanga is that it pretty much eliminates your free will so you’re awake and you’re articulate,” according to VICE. “To anyone else watching you, it seems like you’re perfectly fine, but you’ve completely lost control of your own actions, so you’re at the whim of suggestions, and that’s how people take advantage of you.”

Thankfully, Weyman’s encounter with the flower didn’t result in anything quite so serious. Once she discovered the toxic properties of the plant, she warned her fans away from it.

“It’s highly poisonous and causes hallucinations and zombie-like trances,” she wrote on her Instagram. “SOOOO stick to inhaling my music, not a random flower you find on the street.”

Update 10:50am CT, July 6: When reached for comment, Ralph, who is based in Los Angeles but originally from Toronto, told the Daily Dot she was unfamiliar with the “exotic” flower before stumbling across it.

“It smelled amazing and looked beautiful, so did a little photo shoot for fun, we were just goofing around. We truly had no idea that it was a dangerous dangerous species. Although we didn’t ingest it, we both felt drowsy and unstable shortly after and I had my first-ever sleep paralysis experience that night. I did quite a bit of googling the next day and it has been shown that even smelling the flowers for long periods of time can cause hallucinations and drowsiness, they’re that potent!” she said.

She added that while she’s always “loved smelling flowers on the street,” she’s “learned a valuable lesson this time.”