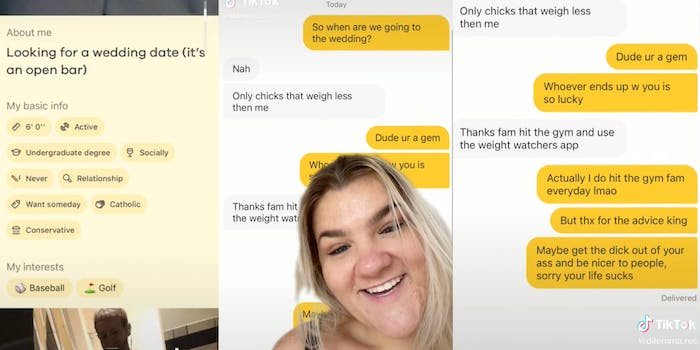 TikToker exposes Bumble match after he tells her to hit up the gym, Weight Watchers

Her exposé of a mean Bumble match drew both praise and criticism from viewers.

A woman is using TikTok to put her Bumble match on blast after he body-shamed her.

He shot her down—after openly asking for a wedding date on the platform—and said he only wants to take “chicks that weigh less then (sic) me.”

She sarcastically called him a “gem” and called whoever ends up with him “lucky.”

He decided to double-down on his body-shaming efforts by telling Emma to hit up both Weight Watchers and the gym.

She further responded by sharing his Bumble, LinkedIn, and Facebook profiles—which included his full name, where he works, and other identifying information—with all of TikTok to see. Her video has garnered over 40,000 likes and over 550,000 views since being posted on Monday.

In a followup video, Emma says she matched with the guy in question only because she speed-swipes through Bumble, essentially treating it as a game of “Hot or Not.” She says she didn’t notice details on his profile that commenters alleged are “red flags.”

“Did I see that he was a conservative? No, because it’s a game of Hot or Not. I was swiping really quickly and I saw open bar and I saw a man with muscles, and I said ‘yeah, let’s go for that,'” she explains.

After she shared his information, she says viewers found out who his parents are and that she didn’t expect the video to blow up the way it did.

“Y’all finding his parents is a little bit unhinged,” she says. “I’m not responsible for your actions. So just keep that in mind, I will say that. Would I have posted his LinkedIn had I known it was gonna blow up and get more than my normal 30 likes? No, I would not have because that’s bitchy. Anyway, we’re on a floating rock, come vibe with me on this hammock, where we have wine, we have heart-shaped sunglasses.”

Her exposé of a mean Bumble match drew both praise and criticism from viewers. Some thought she was right for exposing what kind of person he seemingly is to the world, and others felt she went too far in proving a point.

“Literally what was his reason for swiping then???” @abi.nic wrote. “I’m so sorry some men are terrible sis u r gorgeous.”

“So your response is to doxx him,” @meganlovesicesskating wrote. “(Very) classy.”

In response to critics, Emma said, “I’m not everyone’s cup of tea, cool, he went out of his way to be mean, justice is served.”

Neither Emma nor the man in the video could be reached for comment by The Daily Dot.